More than 1500 kilos of cocaine out of Costa Rica

Another coke shipment caught in port of Rotterdam

For the second time this week, a large consignment of cocaine was intercepted in the port of Rotterdam. Dutch Customs found 1,543 kilos of cocaine with a street value of €115 million.

The largest shipment of cocaine was hidden in a container of pineapples, en route from Costa Rica to a company in Germany. In another container, loaded with bananas from Ecuador, customs found the other batch of cocaine. The companies for which the cargo was destined probably have nothing to do with drug smuggling, the Public Prosecution Service believes. 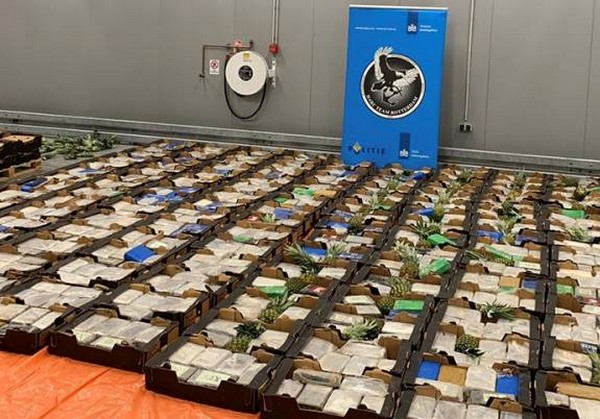 Earlier, more than 3000 kilos of cocaine were intercepted, hidden between the banana puree. That was one of the largest catches ever made in the port of Rotterdam. It was also announced today that twelve employees of a Rotterdam container company have been arrested in recent months for allegedly cooperating in coke smuggling.

In the whole of 2020, more than 40,000 kilos of cocaine were detected in containers in the port of Rotterdam, about 7,000 more than in 2019. According to researchers, this is just the tip of the iceberg.