Agreste, the bureau for statistics of the French Ministry of Food and Agriculture confirms the decline in French apple and pear production.

“On July 1st 2021, the table pear production is expected to reach about 70,000 tons for 2021, which is half a harvest compared to a normal year. It will probably be the lowest production and the lowest yield in at least 46 years, with the exception of 1977 when the yield was even lower. The decline in production is affecting the summer pears more severely. In 2021, the European pear harvest should also be significantly lower than in 2020.” 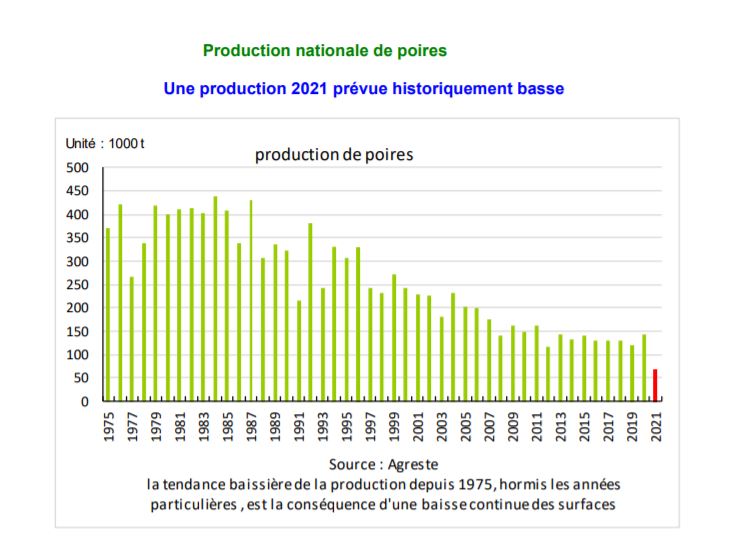 “On July 1st 2021, the French apple production of 2021 is expected to be in clear decline compared to the average of the 2016-2020 harvests and lower than the already-low harvest of 2020. At the beginning of this season, these first estimates, indicative and provisional, will be refined in the next forecast. During the 2020-2021 marketing campaign, the national revenue remained stable.” 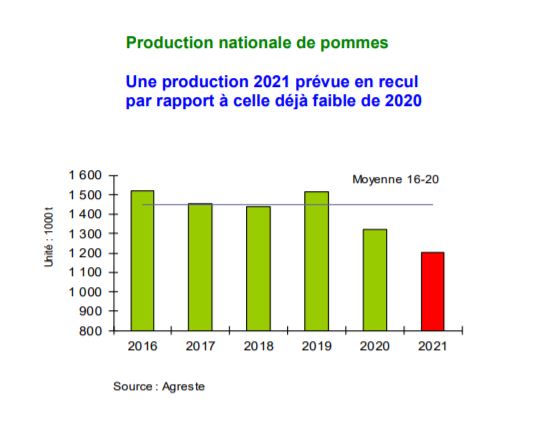 Pears: a half-harvest expected
The decline in production is observed in all producing regions. In Provence-Alpes-Côte-d’Azur, the April frost has had a severe impact on the summer pears, which had already reached an advanced stage of flowering. The recent bad weather (rain, hail..) has also had an impact on the orchards.

In the Rhône Valley, the production is also expected to be lower than its potential with a delay of nearly a week for the harvest compared to 2020. In Languedoc and Roussillon, the losses related to the frost are considerable. In the Center-Loire Valley, half of the harvest is lost due to the frost. And although the frost was less severe in the Pays de la Loire region, the temperature variations have disrupted flowering and caused the physiological fall of the fruits.

Marketing
“According to Interpera, the European pear harvest in 2021 should decrease significantly compared to 2020, as a result of the frost in the spring and the growing number of physiological fall of the fruits in June.”

The only report currently available concerns the 2020-2021 campaign, with a national revenue progressing for the sixth consecutive year (+15%). “The strong increase in production (+20%) compensates for the slight decrease in prices over a year, which still remain above the 5-year average. However, this general evolution hides a disparity between the regions.”

“Physiological falls are accumulating in some regions. With the plant delay and cool temperatures, uncertainties remain regarding calibers.”

Marketing
‘For the 2020-2021 campaign, the apple revenue is stable at the French level over one year, and 3% higher than the 5-year average. The strong increase in prices compensates for the production decline. However, this general evolution hides the great disparity between the regions. In Provence-Alpes-Côtes-d’Azur, the revenue is 11% higher than last year, but 17% lower in Aquitaine. During the first 9 months of the campaign (August 2020 to April 2021), the average prices are high, as a result of the production decline in France in 2020 (13% lower at 1.3 million tons, which is the lowest level in 7 years). In March and April 2021, the demand on the domestic market was moderate and the offer, although reduced, did meet this demand. At the end of April, some operators had already ended their campaign.”