"There is still a strong demand for Spanish garlic"

In the Spanish region of Castile-La Mancha, the garlic sector is immersed in the harvest of purple garlic, the only one in Spain whose differentiated quality is officially recognized by a Protected Geographical Indication: Ajo Morado de las Pedroñeras. The product is of excellent quality this year, according to Luis Fernando Rubio, director of the National Association of Producers and Marketers of Garlic (ANPCA).

"In general terms, the weather has been favorable during the campaign and, at the moment, the very dry weather we are having is allowing the garlic to dry and close well, so we are having some purple garlic batches of exceptional quality," says Luis Fernando. "Besides, the yields per hectare are high and we are having a very good production." 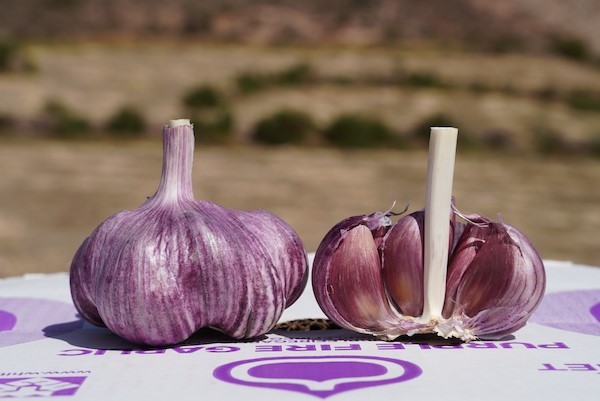 The good prospects in terms of production, quality and yields are not exclusive to Castile-La Mancha, since Spain's other producing regions are also reaping good results with their campaigns. The director of the ANPCA says that "in Castile-Leon, they have already finished harvesting the Spring garlic and are starting now with the later varieties, while in Andalusia the entire harvest is practically finished."

As for the production area in Spain, Luis Fernando reports an upturn of around 6%, in spite of the fact that last year's season did not meet the initial prospects due to the weather; a determining factor in the outcome of the campaign.

Strong demand
There is a very active market for the Spanish production. "The marketing campaign could be described as very good. The demand for Spanish garlic is very strong at the moment," says the professional. "The only problem we have encountered is that some markets traditionally demanding national early garlic, such as Brazil, have bought very small quantities this year compared to previous ones, and that has taken a toll on the marketing," says Luis Fernando. "Little by little, the early garlic market is reactivating. This is happening in more traditional export destinations that are not so far away, but have a commitment to quality and added value, such as the United States or Canada. As for purple garlic, we are having a very good demand and receiving large orders."

The garlic season thus offers very favorable prospects this year, despite the unprecedented logistical difficulties for global maritime traffic, which particularly affect China, the epicenter of global garlic production, and at the same time, the world's largest exporter.

"The container crisis problem is having an impact on garlic prices in China, but not only there. Freight rates are skyrocketing dramatically and that is also affecting us when it comes to meeting commitments and reaching markets," says Luis Fernando.

However, the increase in shipping costs is not being an obstacle for the Spanish production, given the strong international demand for it and the good development of the marketing campaign. "It is impossible to face China's garlic prices and volumes, but we can differentiate ourselves through quality and added value. We are succeeding with this, although it has taken a lot of effort," says the director of the ANPCA.