US greenhouse growing company BrightFarms today initiated a voluntary recall of packaged salad greens produced in its Rochelle, Illinois (Ogle County) greenhouse farm sold in Illinois, Wisconsin, Iowa and Indiana because it has the potential to be contaminated with Salmonella. "BrightFarms is taking this action out of an abundance of caution after being notified of illnesses among eight consumers, some of whom purchased or consumed the above products during the month of June," the company states. 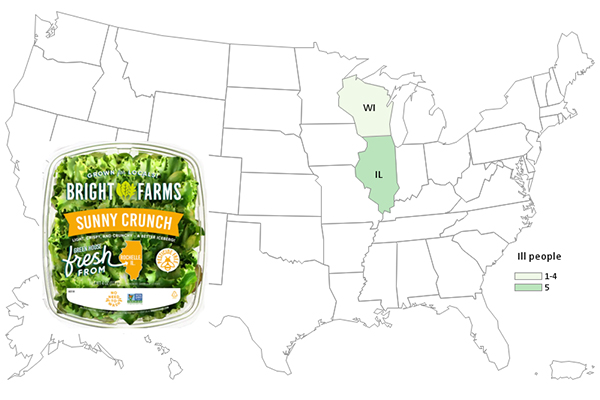 FDA Investiagtion
The FDA, along with CDC and state and local partners, is investigating the multistate outbreak of Salmonella Typhimurium infections. FDA conducted a traceback investigation and identified the farm in Rochelle, IL, as the likely source of the salad bought by people who became ill "Although it is early in the investigation, epidemiological and traceback evidence from sick people indicate that this outbreak is linked to BrightFarms Sunny Crunch Salad produced in Rochelle, IL," the FDA shares. "Interview data and shopper card records show that five people ate or bought this type of salad before they got sick." The total illnesses now stand on 8, with no hospitalisations.

BrightFarms advise consumers, restaurants, and retailers not to eat, sell, or serve several salad products packaged in clear, plastic clamshells with "best by" dates through 7/29/2021:

Additional retailers may be affected.

Throw away
"Consumers, restaurants, retailers, and distributors should check their refrigerators and throw away any of the products identified above. If you purchased or used these products, you should use extra vigilance in cleaning and sanitizing any surfaces that may have come in contact with the product, to reduce the risk of cross contamination," FDA states.

They recommend that anyone who has symptoms of salmonellosis contact their healthcare provider.

According to BrightFarms, the recall is limited to these specific products grown at the company's Rochelle, Illinois indoor farm. BrightFarms products from other BrightFarms greenhouses are not affected.

"BrightFarms is committed to providing wholesome products, and the health and safety of consumers is the company's number one priority. In addition to today's voluntary recall, the company has already begun taking steps to enhance their already rigorous food safety protocols, including testing all products produced in its Rochelle facility for exposure to Salmonella prior to distribution," the company states.

Consumers who have purchased the affected products should discard them or return them to their place of purchase for a full refund. Consumers with questions are encouraged to call 1-866-857-8745 8am – 11pm EDT. Consumers can also email info@brightfarms.com with the subject line: Recall.