Spare a thought for the truck drivers as President Cyril Ramaphosa visits Durban and the N3 highway linking the port city with the north's fruit orchards, re-opens.

Some truckers, en route to Durban with their loads of citrus, were stuck for days by the side of the road, unable to continue and unable to divert to another route. Others who had delivered their load in Durban last weekend were caught up in a war zone and are still trapped at truck stops with no food and no means of reaching them. It’s still not safe enough to resume their journey.

“Truck drivers have a merciless job and they serve such an important role in our economy,” says Daniël Bosman, managing director of Werda Cargo.

Getting citrus out into world: Jimmy Mosamo, Alson Marobela and Werner Rooi, Werda Cargo truck drivers stranded at the FPT truck stop in Durban for five days now without food as chaos erupted around them


Diverting to Cape Town: a very expensive option
A packhouse manager in Mpumalanga, where they still have six weeks to go on their high-value late mandarins, explains that they have started sending fruit for the EU and UK, and even for China and Taiwan, to Cape Town two days ago when the army secured the national road past Johannesburg.

“Our coldrooms are chock and block with fruit, but a packhouse isn’t built to keep a week’s fruit. It has storage for two, maximum three days of fruit, and then you’re full.”

Trucks return empty from Cape Town, unlike on the Durban route, which doubles the transport cost, but there is surplus capacity at Cape cold stores outside of the table grape season.

“Transport costs rise from around R15 a carton to almost R30 a carton,” he explains, “But what can we do? The crop has to come off. We can’t let the fruit hang, the harvest is too big and we’ll go beyond our harvesting window.”

Citrus packhouses in Limpopo and Mpumalanga hope to start loading out fruit for Durban by next week, but at the moment cold stores in Durban are still full with fruit from even before the unrest started.

"The Durban port precinct is still compromised and people's safety in Durban come first," notes the Citrus Growers' Association CEO and Durban resident, Justin Chadwick, today in a tweet. He cautions against moving the problem from the packhouse to the port and advises careful consideration before resuming deliveries to Durban. 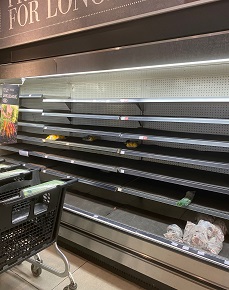 It is expected that activities at Durban port terminals will start picking up this weekend as the safety situation hopefully continues to improve.

In communication with stakeholders Transport Port Terminals has said it will now focus on relieving the backlog in the container vessels.

“Currently resources who are working are preparing the terminal (housekeeping) and focusing on loading vessels which can complete in order to depart. This will make space in the stack for future vessels. Where possible we will backload and discharge in order to operate in most optimal manner. The operations are currently operating on skeleton staff. We have ensured full security at all terminals, with support from authorities in the surrounding vicinity of our terminals.”

The pushback from South Africans against the anarchy (now roundly accepted as being orchestrated) has resulted in some unexpected positive outcomes, like the protection of Mpumalanga’s capital Nelspruit by taxi organisations.