The multinational firm SanLucar, devoted to the production and distribution of premium quality fruit and vegetables, has received the Economía 3 Award for Internationalization. This recognition underlines the international orientation of the company, which annually sells more than 676,000 tons in 45 countries, and which employs more than 3,000 people of 30 nationalities at its headquarters in Europe, Africa, Asia and America.

"Internationalization is in our DNA," said Rafael Calvo, SanLucar CFO, during his thank-you speech at the awards ceremony. "It is common for us to be welcomed at any of our headquarters in English, Spanish, Arabic or even Afrikaans. This is just a reflection of our international projection." 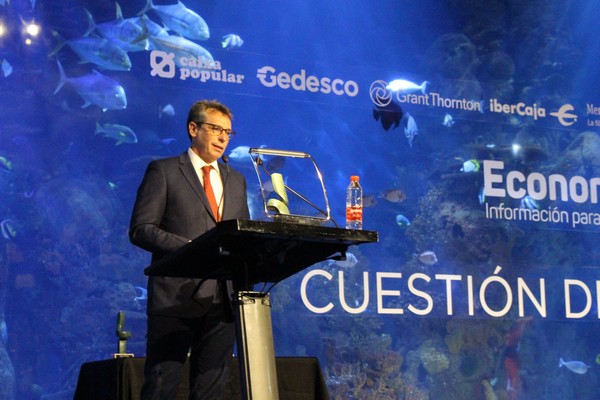 Rafael Calvo, CFO of SanLucar, during the awards ceremony.

He also said that "since SanLucar was founded as a start-up 28 years ago, we have become a consolidated multinational group, but our spirit hasn't changed. We have always aimed to provide the most natural, fresh and tasty fruit and vegetables, and to be proud of the way we do it."

Rafael Calvo also took the opportunity to say that the agricultural sector as a whole was deserving of the award "in a year in which the essential role of agriculture for society has become clearer than ever."

The Economía 3 Awards ceremony took place at the Oceanográfic of Valencia, in a ceremony chaired by the President of the Government of Valencia, Ximo Puig. The meeting, which was organized complying with all health safety measures, was also attended by prominent representatives of the region's political and economic world.

The Economía 3 Awards serve to offer recognition to the most relevant success stories in the Region of Valencia. The awards highlight the work of entrepreneurs and professionals from different sectors.