First in the nation discovery

U.S. Customs and Border Protection agriculture specialists at the Pharr International Bridge discovered a rare pest, a first in nation discovery, in a shipment of coconuts.

“By intercepting these exotic pests, our agriculture specialists help protect American agriculture and contribute to the nation’s economic security by denying entry to invasive species not known to exist in the U.S.” said Port Director Carlos Rodriguez, Hidalgo/Pharr/Anzalduas Port of Entry. 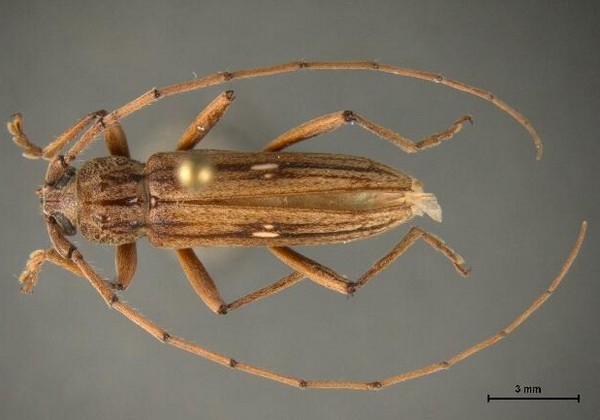 A specimen of Eburia Nigrovittata, a first in nation pest interception made by CBP agriculture specialists at Pharr-Reynosa International Bridge.

On June 17, 2021, CBP agriculture specialists at the Pharr cargo facility conducted an inspection on a commercial shipment of coconuts arriving from Mexico, which resulted in the discovery of a live pest.

The insect was submitted for identification to a U.S. Department of Agriculture entomology laboratory and the initial identification was later confirmed by a national specialist as Eburia nigrovittata.

A member of the Cerambycidae family, the Eburia nigrovittata is a species of longhorn beetle, which feeds on stems, trunks, roots of herbaceous or woody plants and can cause extensive damage to living trees or untreated lumber. According to USDA entomologists, this pest has never been found at any of the nation’s ports of entry. CBP refused entry to the shipment and returned it back to Mexico.

The interception is an example of the diligent work CBP agriculture specialists do on a daily basis to fulfill CBP’s agriculture mission, which is crucial in preventing foreign pests from establishing in the United States. Pests that are not known to occur in the U.S. may be detrimental to the nation’s agriculture industry.