Traditionally, pallets of packed fruit were stored by securing steel corner posts to each pallet and then storing another level of pallets on top. While doubling store capacity, this form of block storage effectively prevented stock rotation, increased stock damage and in some situations prevented adequate cooling.

Mobile racking was first used in 1997 in a fruit store outside Grabouw in the Western Cape. Designed to take a combination of 2,200mm and 2,400mm pallets with a maximum weight of 1,000kg, the pallets were stored with the 1 000mm side facing and the 1,200mm side in the depth of the racks. 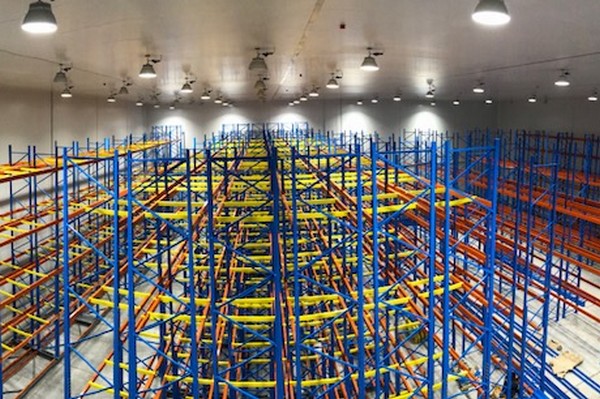 Mobile racking consists of special rails that are laid in the floor during construction. Rails can also be retrofitted in existing rooms provided the  floor is suitable by levelling the rails on the existing surface and pouring a 150mm reinforced slab. A low ramp is needed at the entrance. The mobile bases run on the rails and support pallet racking which is specially designed for use in a mobile application. The bases are motorized and energy efficient.

According to cbn.co.za, maximum tonnage per base varies but should not exceed 360 tons. In larger stores mobiles are arranged in banks of up to 10 bases, each with its own moving aisle. The bases are controlled either by push buttons, remote control, or by an interface with the warehouse management system. An access aisle is created at the push of a button.