"People want to buy our product, but it is the challenge of how to get it to them, quickly and still fresh"

The challenges faced by Australian exporters during the COVID-19 pandemic

Customers around the world want to continue to buy Australian fruit and vegetables, but currently, there are many challenges getting the product to them, according to the Export Council of Australia.

Hosting an export supply chain discussion panel at the Queensland Horticulture Export Congress, held in conjunction with Hort Connections, Chair Dianne Tipping explained that logistics have proven to be a challenge for many growers and exporters during the COVID-19 pandemic, which is now affecting its second winter season.

"We have great agriculture, great vegetables and great fruit - but we are challenged at the moment," she said. "We do need to remember that people want to buy our product from Australia, but it is the challenge of how do we get it to them, quickly and still fresh. We cannot afford to lose our export markets, because there is always someone ready to pounce when we don't go there and sell our product. Export is vital for Australia and our economy, and we do produce more than what we can eat. So, if we don't grow them and sell them overseas we lose jobs as well." 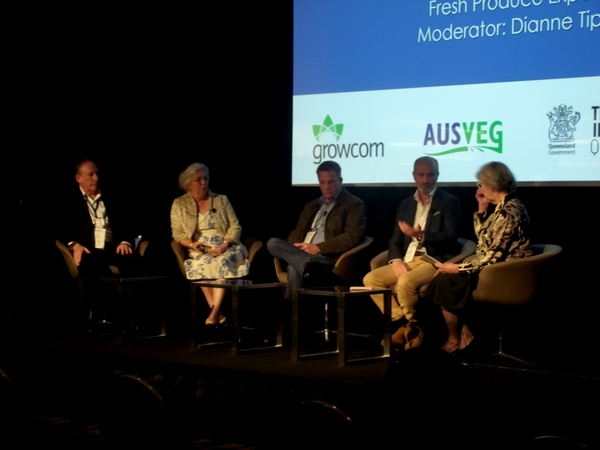 Also on the panel was Kees Versteeg from Qualipac, who told the congress that during the pandemic growers/exporters find out whether their customers are willing to work with them in building relationships, or are only in it for the money. But he agrees that export is vital for Australian fresh produce businesses who want to grow.

"Export is the only option, unless they want to grow less, or don't want to expand their businesses," he said. "Unless consumers in Australia buy twice as much fruit and veg, which is not going to happen overnight. In my opinion, export is the only option to grow the business and the industry. I think International Freight Assistance Mechanism (IFAM) has kept us going and it does suss out your good customers from the bad customers. So, those willing to pay the extra freight component, and those who will shop around for a cheaper alternative. Although I do think Australia has lost some market share to other countries, you don't really know."

Mr Versteeg says that the cost of air freight almost quadrupled overnight in price, but his company has had a focus on sea freight well before the outbreak of COVID-19. He noted that export was a key part of the business plan and while sending shipments by sea also had a price increase due to COVID, he just deals with it because the costs were still more competitive than air freight.

"The shipping lines and containers all had their schedules working," Mr Versteeg said. "When COVID started that all fell out the door. You cannot even go online today to follow a shipping line schedule, because more than likely it is going to change. I have seen vessels leaving the port of Brisbane, expecting them to be in Asia in 10 days, but you find out in transit they have gone to another port. So, you have fresh produce in the container taking double the time in transit, and you have to cross your fingers that the alternate port is alright. The biggest obstacle I get from the Asian countries is price, price, price. They are very price orientated and we can't compete with New Zealand and Mexico, California or China. We are exporting Australia as a brand, and a lot of countries are catching up to the 'clean and green' production. So, we can't rely on just that anymore."

The problems with logistics are in addition to the labour shortage caused by the Australian Federal Government closing its borders to foreign workers, who make up a large part of the horticulture industry's workforce. Mr Versteeg says that people are continuing to leave farms because they want higher wages when usually people are knocking on his door for jobs.

Judy Shepherd from Shepherd Citrus is also facing major challenges when it comes to staffing, which has been made worse given production is a massive 40 per cent above normal levels this year. The company last month finished its domestic season, and Ms Shepherd says her company will still be exporting.

"I am a little anxious given that we will be competing with others for containers," she said. "Previously, we would have owned that space in July-August out of Brisbane, and air freight does not really exist for us because it is such a big commodity to get the value. But I think this year is not the year to take a risk in any way, shape, or form. We have already not had the best domestic season because of the amount of product in the market, but one of the things about tree crops is that you have to do something with that product. A lot of our product is 20-30 years in the making and we are very tied to export, and there will be no thoughts of not exporting because the product is not as well received in the domestic market. We will be doing it positively, with the right partners and going into the markets where there is the lowest risk."

The company goes to 14-18 markets around the world, mostly in Asia and the Middle East. One market that is providing uncertainty for Shepherd Citrus is China, where there are reports of containers being stuck in ports 7-10 weeks, which Ms Shepherd says does not suit citrus.

"Added to that, we don't have the ability to get on a plane and go over and fight for our consignments and tell them that it is not our issue," she explained. "We don't have the friendly person on the ground that is easy to go through in all huge Chinese markets. It is going to be a challenging year, and it is hard to know what is coming this year. I am not saying that there will be no product in the market (from Australia in general) but I think it will take a brave person to consign anything to China. We are thoughtful about not putting all of our eggs in the one basket."

In terms of air freight, exporters are hopeful that the IFAM will be continued past September, and Ms Tipping noted that a lot of the produce has to be sent to Sydney from interstate, due to more availability of flights from the New South Wales capital. Businesses are also hoping for travel to open up again soon, so they can build more relationships with customers, as online networking is nowhere near as successful.