Climate scientist: “We don’t really understand the drought in the Eastern Cape” 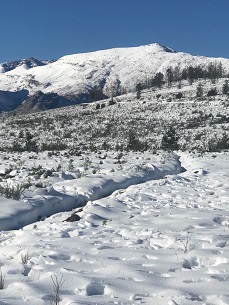 The Western Cape is basking in the cold of a reassuring winter and the mountaintops are white with snow. It is expected that the important Theewaterskloof Dam will overflow by this weekend; it’s currently 95.8% full.

Right: a heavy snowfall has been predicted for Matroosberg, highest peak in the Western Cape's Boland (archive picture)

The Western Cape's June rainfall was the highest since 2019.

High winds this week have disrupted road transport in the province and at the port of Cape Town vessels are ranging because of swells.

In the Eastern Cape – which is not a winter rainfall area, although there is an area of overlap – the situation is far from reassuring and climate scientists are unsure why a long, wide strip of the country from the northwest to the southeast, ending up in the Eastern Cape, has been in drought for three years.

“We don’t really understand what’s causing the drought but it’s got something to do with major systems in the atmosphere where we’re seeing the persistance of high pressure in places where there should be low pressure systems,” Dr Peter Johnston of the University of Cape Town’s Department of Environmental and Geographical Science told CapeTalk radio this morning. Dry conditions reign under high pressure systems.

“These high pressure systems have seemed to be expanding over the last five years and it’s very, very hard for us to say what’s causing it. Climate change messes with a lot of our pressure and a lot of our temperatures.”


“The point is: when their rain comes, we have to be ready. We need to institute measures that make sure that we become resilient, we have to save water and we need to look after our dams.”

The Eastern Cape’s Kouga Dam stands at 4.7% and the water available for consumption in the Nelson Mandela Metro (Gqeberha, formerly known as Port Elizabeth) was last month reported to be below 12%. Water leaks still account for significant water losses within the city, which has approached Cape Town to learn from its drought experience.

The series of floods in Gqeberha (Port Elizabeth) and East London of a few decades ago are certain to re-occur, he said, adding that it was impossible to predict when, as the length of climate cycles are an unknown.