European and Asian expansion for Equilibrium

Equilibrium, the company that this week closed the industry’s largest Controlled Environment Agriculture Fund at $1.022 billion, has established an office in Singapore and has Dutch master grower Godfried Dol and former Rabobank Asia & career agricultural investor John Baker manning it. Currently, the company is trying to develop the first high-tech glass greenhouse in Singapore. And there’s more. In the next year, Equilibrium is expecting to get several European greenhouse companies onboard.

“As the industry grows, capital and expertise are what’s needed. We’re in a great position to aggregate and consolidate as this industry matures,” Dave says. “In many countries in South East Asia, it is about food safety. In Singapore for example it is about food security: a small island nation that has little agricultural space. Yet, if it is safety, security, consistency, quality or the ability to manage climate volatility that is in demand and regardless of the order, they all contribute to the same demand for CEA facilities.”

David explains that he believes there to be plenty of opportunities in Asia – something that hasn’t developed at all since the industry grew out of Holland, and the current greenhouse crops mainly reflect the European diet. “Or as one policymaker said ‘We do not eat a lot of kale here.’ But they do eat a lot of vegetables. Bitter ones, different ones. There’s plenty of room to grow and innovate and that’s exciting.” 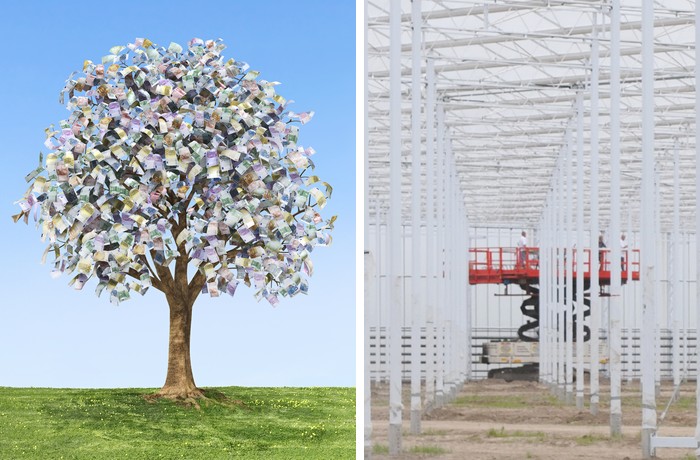 European market
And there’s more. Also in markets where the CEA industry has matured, Equilibrium sees opportunities. Earlier Dave shared his belief that access to capital is a competitive advantage and with this in mind, the company is also for operators in Europe. “We’re setting the tone for the Dutch industry,” Dave confirms. “When AppHarvest went public, we jokingly said that we listed a farm. When that happens, the family business balance sheet being the support for growth is likely no longer to be adequate. By now several companies have announced their listing, often through De-SPAC (Special Purpose Acquisition Company), and have seen also a significant rise of private capital. This will happen in Northern Europe in 2021 and 2022.”

Dutch greenhouse suppliers
Over the last couple of years, private equity found its way towards the Dutch greenhouse suppliers, yet with some exceptions in place, still, growers mainly relied on Rabobank as their capital plan. “It’s also evidence of the fact that many of the growers in the Netherlands are coops, and coops are tough strategic vehicles,” David says. “Then again, before the expansion was measured in 5 hectares or 10 hectares. What we see now in the North American projects are routinely 25 hectares or 50 hectares expansions. We polled the Dutch venture industry and asked them if they were able to meet the capital industry in the growth of construction in North America. Only a year ago all of them said, without hesitation, that it wasn’t a problem. If you would poll them today, they would look at each other and say there’s no manpower.”

Equilibrium has, David adds, and confirms that the company is on the lookout to work with Dutch growers. “We’ve been working on long-term relationships with Dutch suppliers for a longer period by now – but we’re their clients. That’s not the case for the operators. Over the course of the next year, you’ll see us increasing our exposure working with European operators and operators in the Netherlands that have a desire to expand their footprint.”

He is assured that the company’s reputation as a collaborative, dedicated, and a domain-o-where investment firm will help them gain ground in the European industry. “Vendors know that when we commit to a project, it is fully capitalized and that they can play with security and certainty. We always came with capital, we weren’t developers that were raising capital for each project – we’ve committed capital to each project. People want to work with us because they know that. Then there is our team with Nick (Houshower), Gave, and also with Marco and Godfried. They are either experts in the industry or in construction or in the case of our team, have taken the humility to learn and learn again. Vendors know that we’re not the company to make crazy requests. We may push hard, but nothing crazy.”

So why does the company want to invest in the Dutch industry? David explains he continues to see opportunities there, despite the coops. “The Netherlands, and to some degree Israel, have built these industries out of necessity. Innovation took place to solve very practical problems, and got to grow these industries. Where it was a curiosity for the rest of the world, it was practical for the Netherlands. Under the radar, the Dutch grew expertise and dominance and while everybody looked at in the broad daylight, there wasn’t much invested in it. 2020 / 2021 made the ‘Americanisation’ of the Dutch industry visible. And now that Silicon Valley technology and the capital industry has started to look at the industry like mainstream agriculture, funny things happen.” He explains how larger operators like AppHarvest have a Chief Technology Officer for example. “Continuous absorption of technology platforms for productivity is a way of life. If you do not have the dollars to afford a technology operation, you are at a competitive disadvantage.”

Will it result in further upscaling and eating or being eaten in the Dutch greenhouse industry? David adds a third option. “Increasingly we’re seeing small farms not being the eater and being too small to be eaten. Stranded assets,” he says. “Not just in the Netherlands. Some of the small ones will have to decide: will they focus on a niche, or will proximity be their unique point – something that enables them to thrive in that scale and differentiate. Otherwise, a number of small-scale facilities are to question their future.”