A detailed feedback from a producer of vegetables in Emilia Romagna

Heat and drought are causing a 50% increase in costs

"The drought is causing us a 50% increase in expenditure compared to a normal year. This is an exorbitant amount of money, given that I cultivate 120 hectares of vegetables," said Giuseppe Minzoni, an Italian farmer in the province of Ravenna, who is very accurate when it comes to calculations. In the first six months and five days of 2021, 167 mm of rain fell in his area, compared to 275 mm in 2019. Year 2020 also suffered from a lack of rainfall.

"What really annoys me is that the effective cost of water can only be estimated, because I will only receive the final bill from the consortium in May 2022. In other words, the institution calculates all their costs for the year and then offloads them onto the companies. This is not acceptable. How can you do business if you don't know in advance how much you're going to spend on irrigation?".

The only certainty is the daily cost of diesel fuel (which has risen from 0.50 to 0.70 €/litre in just a few months) needed to draw water from the canal that runs through Emilia-Romagna (Cer). This canal starts from the River Po and carries water across Romagna, all the way to the province of Rimini. The Cer is at risk if River Po runs dry. 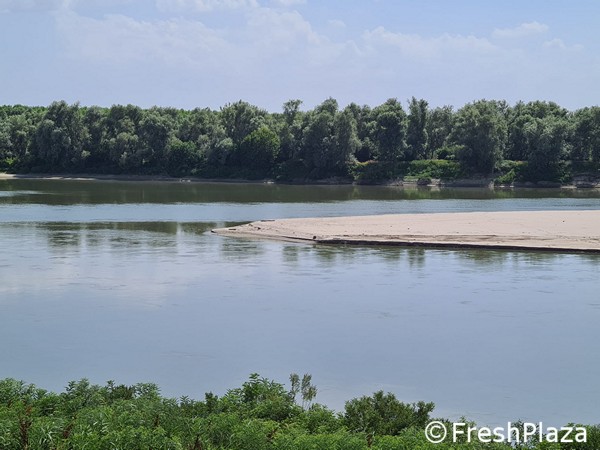 During this period, Minzoni irrigates tomatoes for industrial use, string beans, chicory and parsley, as well as spinach and herbs. He supplies the crops to Orogel Surgelati.

The Associazione Nazionale dei Consorzi per la Gestione e la Tutela del Territorio e delle Acque Irrigue (ANBI) (National Association of Consortia for the Management and Protection of the Territory and Irrigation Waters) pointed out that the latest low rainfall, which mostly fell irregularly in Romagna, occurred 45 days ago. Since the beginning of the year, the total rainfall is about 170 millimeters, exactly half the average for the period and at least 40% less than the rainfall recorded in the arid area of Haifa, in Israel.

This is a trend that is being repeated, after the driest year in recent times, i.e in 2020, which confirms the persisting critical water situation, intensified by the global warming.

The River Po is in a critical state due to the early drop in its level (currently at about 30% of its historic flow rate). The Cer canal that transports water from the Ferrara area to Rimini along a 135-kilometre route, originates from the river. At present, the total flow rates of the region's Apennine rivers do not reach half of the canal's flow rate, which currently equals 55,000 litres per second.