An organic solution to combat and minimize stress in plants

Currently, stress caused by climatic factors is estimated to cause up to 50% of the annual global production losses. In a world with ever-present climatic fluctuations, with hotter summers and warmer winters, questions regarding food security arise. Plants are subjected to diverse types of stress throughout their growth cycle, such that their development is hindered and thus their productive potential is affected. Therefore, it is essential to look for solutions to alleviate stress and thus avoid any production losses. Stoller has developed an organic certificated formula, GreenForge. An unique and patented solutions that minimizes stress in plants.

The evidence: Trial results to ensure production on plants under heat stress conditions.
A trial undertaken in collaboration with the University of Alicante in Spain shows the effect of the product GreenForge when applied at different doses on tomatoes subjected to heat stress. Different measurements were made to establish the degree of stress on the plants Control (CT) submitted to heat stress and in the plants treated with GreenForge. The Stoller technology used in the production process of GreenForge makes it unique in combating stress and empowering plants to recovery and growth after the stress situations. All these were compared with a Control (C) in normal conditions.

Transpiration Intensity
In normal conditions, a regulated level of transpiration exists, as is observed in the normal Control (C). In heat stress conditions (CT), the plant opts for increasing water loss as a cooling mechanism to avoid tissue damage owing to this type of stress. Significant differences were observed in the plants treated with GreenForge. These treatments have shown a lower transpiration rate due to the fact that they did not suffer the consequences of heat stress, and thus they developed a similar behavior to the Control (C). 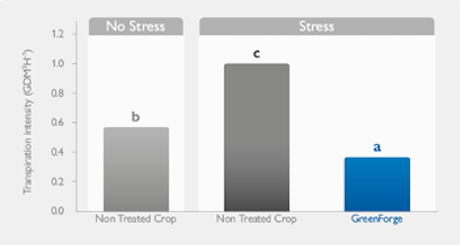 Photosynthetic pigments
In this case, the chlorophyll content was analyzed in fresh leaves so as to determine the photosynthetic capacity of the plant 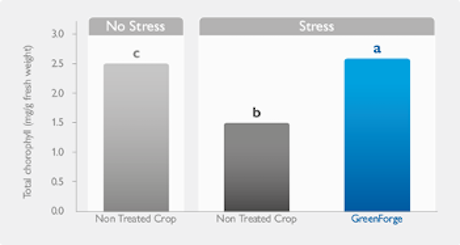 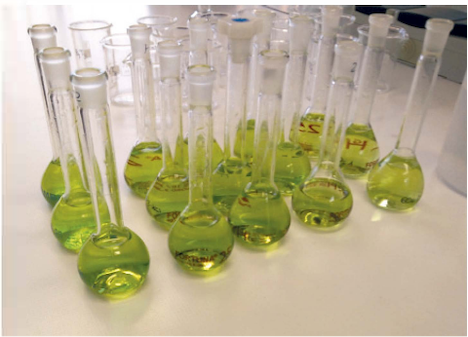 Chlorophyll extract from each tesis

The data show that there is a considerable increase in chlorophyll content in the plants treated with GreenForge, obtaining statistically significant differences in comparison to the heat stress Control (CT) and with the normal Control (C) that has not suffer stress. The results obtained, confirm that GreenForge stimulates photosynthesis thanks to its influence on the expression of photosynthetic genes, thus increasing the accumulation of photosynthetic pigments, specifically chlorophyll. The decrease in the chlorophyll content in the heat stress Control can be due to the effect of oxidative stress owing to the accumulation of reactive oxygen species (ROS).

Oxidative stress
Oxidative stress is caused by an imbalance between the synthesis of reactive oxygen species (ROS) and the ability of the biological system to detoxify the excess of these molecules. If the organism is unable to detoxify the ROS, these molecules can cause severe damages and alter the organism's metabolism. To study the presence of oxidative stress in plants, the concentrations of Malondialdehyde (MDA) a dialdehyde produced during stress and an indicator of membrane damage is studied. 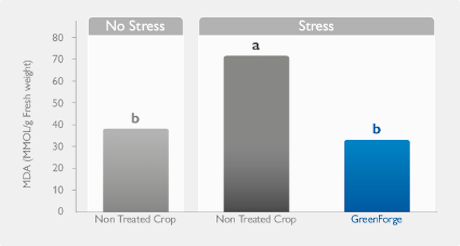 A significant accumulation of MDA is observed in the heat stress Control (CT) whereas in plants treated with GreenForge, lower values of MDA are observed and are similar to those of the normal Control (C), without presenting statistical differences between them. MDA is known to be an indicator of membrane damage, hence an increase in its accumulation signifies more damage in the membrane. In both cases, the treated theses with GreenForge, present a membrane in good state, a fact reinforced by the concentration of MDA present in the measured theses. In the heat stress Control (CT) a higher accumulation of MDA is observed and thus representing more damage in the membrane.

In this trial carried out by the University of Alicante in Spain the Stoller technology included in GreenForge was shown to be able to stimulate the physiological recovery of plants subjected to heat stress. Statistically significant differences were observed between the treated theses and the heat stress Control, in such a way that the plants treated with GreenForge showed similar results to those one that do not have suffer stress.

In conclusion, all the results from this trial verify the positive effect of GreenForge on the global physiology of the plant, by inhibiting the synthesis of ethylene and reducing the presence of stress, thus restoring the plant to a physiologically balanced state, despite being in an adverse medium, thanks to the unique and patented Stoller technology included in GreenForge

The Stoller technology used in the production process makes it unique in combating stress. GreenForge has showed the complete recovery of the crops subjected to different types of stress. Furthermore, GreenForge has the ability to stimulate root growth and the expression of photosynthetic genes, helping with crop recovery after the stress.

About Stoller Europe
Stoller Europe is the subsidiary of the American multinational Stoller Group, which serves the agricultural markets of Europe, North Africa and Russia. The team is made up of highly trained professionals who combine in-depth knowledge of plant physiology with knowledge of local crops and their specific problems.