Container xChange, an online container leasing and trading platform, recently released the "2021 Demurrage and Port Detention Fees Benchmark Report”. The report shows that in the past year, the demurrage fees charged by global container shipping companies to carriers soared at an unprecedented rate. During this period, none of the top 20 ports in the world in terms of throughput saw fallen demurrage fees. However, the fees differ greatly between ports and companies. On average, the lowest demurrage fees are charged by COSCO in Busan Port, and the highest are charged by CMACGM in Long Beach and Los Angeles. 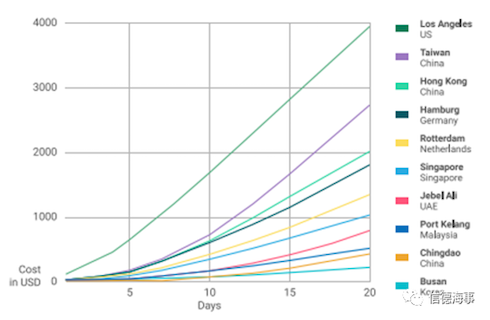 The report found that from March 2020 to March 2021, the average demurrage fees charged by ports and shipping companies at the world’s 20 largest container ports more than doubled two weeks after containers were unloaded. The increase in fees amounted to 104%, equivalent to $666 per container. 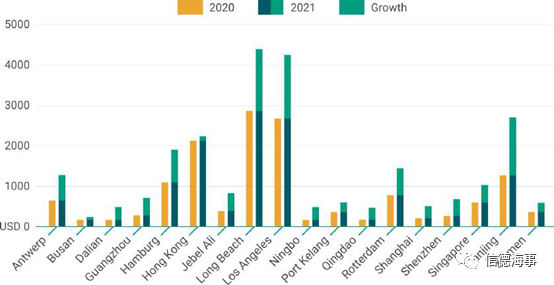 Christian Roeloffs, co-founder of Container xChange, said: “Demurrage fees have always been an area of ​​conflict between shippers and carriers. As costs spiral up, the tension has strained even more this year. We hope this report will improve transparency for all parties so that relevant parties can negotiate and make business decisions after knowing the accurate costs and expenses."

The demurrage fees charged at Chinese ports are still much lower than at many other major ports
From March 2020 to March 2021, the demurrage fees charged at China's top ten ports increased by an average of 126%. The largest increase was seen in Qingdao, with a year-on-year increase of 194%, followed by Dalian, with a year-on-year increase of 187%. 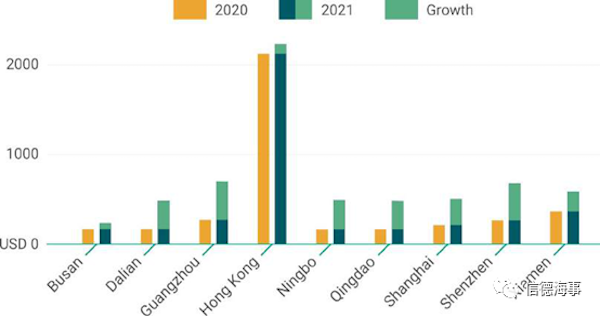 However, China's demurrage fees are still much lower than many other major ports, and seven of the ten ports with the lowest charges are in China. In contrast, the highest fees in the world were seen in the Port of Long Beach in March this year, as the average demurrage fee for two weeks at the port after the unloading was US$2,638. The port with the second highest fees was the neighboring Los Angeles at US$2,593.

"In the United States, the US Federal Maritime Commission is investigating the container shipping industry because many shippers are concerned about fairness. Demurrage charges have been rising at an accelerating rate. Combined with record-high container freight rates and global container shortages, the pressure on shippers and the industry has increased.”

Large price differences between ports and shipping companies
Demurrage fees not only vary from port to port, but also from shipping companies in each port. The Port of Los Angeles has been the “center of confusion” for trans-Pacific container trade in the past year. From March 2020 to March 2021, the average demurrage fees increased by 7% to approximately US$142. CMA CGM’s expenses increased the most, with a 167% increase over the same period. Maersk followed closely with an increase of 161%. 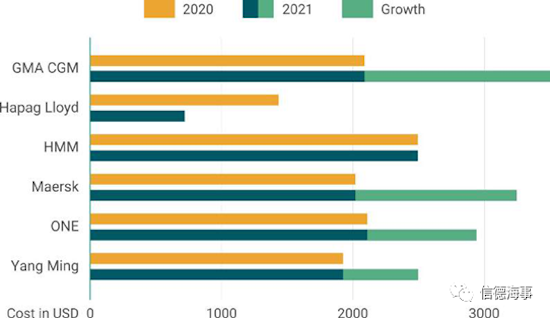 In contrast, unlike other shipping companies in the Port of Los Angeles, COSCO Group reduced the average demurrage fee from US$1,417 in March last year to US$1,213 in March 2021, a decrease of 15%. At the same time, in Hamburg, the cheapest shipping company in March this year was CMA CGM, with a two-week demurrage of US$258. Yangming was the most expensive at US$1,612.

From a global perspective, the cheapest combination of carrier and port is COSCO and Busan Port in South Korea, and the most expensive combination is CMA CGM and Port of Long Beach or Los Angeles.