Titan Farms, a grower of South Carolina peaches, is now shipping its patriotic-themed volume fill box named “America’s Peach.” The America’s Peach Box will be packed from June 23 to July 10 and are available nationwide while supplies last.

“Titan Farms felt a patriotic tribute box was the way to celebrate the pride our customers have for their nation as well as to piggyback off the excitement for Independence Day,” says Ross Williams, director of packaging operations and food safety. “With such great success last year, we had to bring it back for another year. Retailers couldn’t get enough of “America’s Peach” and had built such large and luxurious displays drawing people to the produce department in the peak of peach season.” 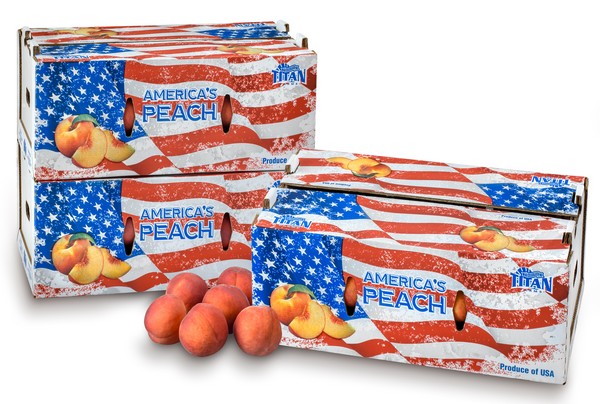 The America’s Peach Box will be packed from June 23 to July 10 and are available nationwide while supplies last.

The “America’s Peach” box will be sent to customers in place of the traditional Titan Farms volume fill box.

“Our peach is the true American peach, and it represents what America and summertime is all about,” says Williams. “What better way to tie it all together than with an American flag as the focal point on this unique packaging.”

The microclimate and favorable soil conditions on the ridge between the piedmont and coastal plain regions east of the Savannah River are what make Titan Farms’ peaches flavorful. The blend of sand and clay soils coupled with hot days helps enrich the sugar content of the peaches. Titan Farms’ intensive horticultural practices during the off-season help produce premium size and quality fruit.