Many parts in the Northwest of the United States are seeing scorching temperatures. On the first day that high temperatures were recorded, Portland, Oregon, saw a record temperature of 41.7 degrees - the highest in a century; in Seattle, Washington, the temperature reached 38.3 degrees, breaking the record set in June and making it the second hottest day ever recorded in history. For sensitive fruit like fresh cherries, the heat has brought unprecedented challenges to the harvest, packaging, and transportation.

At 19:30 on June 27th, the first shipment from Chelan Fresh, Frutacloud's strategic partner and the largest exporter of Washington cherries in the United States, arrived in Ningbo, China via a chartered flight, before undergoing inspection and quarantine procedures carried out by the customs office. 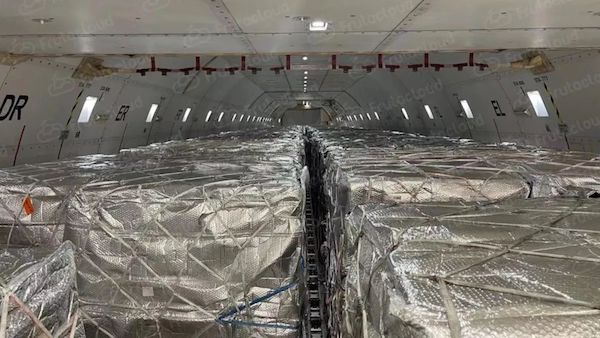 The cabin of the chartered flight laden with Washington cherries

This flight carried a total of 111 pallets of a total of 80 tons. They are mainly of early variety Chelan and early and mid-season variety Santina. The shipment was flown from Moses Lake Airport only 1.5 hours' drive from the Chelan Fresh headquarters.

Even with the pandemic, Frutacloud sent their direct sourcing team to the US. The team arrived in Seattle on June 12 and visited various production areas. They were briefed on the latest production information and visited the packaging plants to supervise the selection and packaging of export goods. The team supervised the entire process in the heat until the shipment was safely loaded on the plane.

The Frutacloud direct sourcing team will spare no effort to cope with the difficulties together with the suppliers, and do their best to ensure that the cherries shipped to the Chinese market will always maintain excellent quality. The company’s local team in China are also prepared to work side by side with major retail partners to get ready for the peak season in mid-July.