"Despite declining second half of the season, onion exports could set a new record"

"Onions have never been as popular. They're on an unprecedented upward march. This season, Holland Onion looks set to set a new volume export record. That's despite a decline in exports in the second half of the season," says the Holland Onion Association.

This season, for the first time ever, the 'magic' 40,000 tons/week export ceiling was broken. Weekly export volumes of almost 50,000 tons were even achieved. Until barely ten years ago, exports of even half that volume were only sporadic. It, once again, demonstrates the Dutch onion chain's fantastic logistical flexibility. 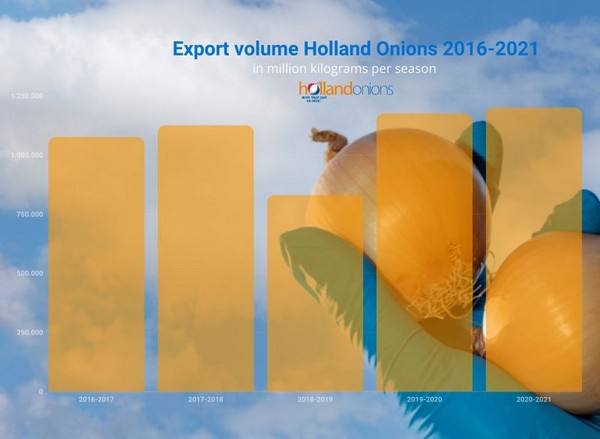 Onion in vegetable top 3
Last year, during the global pandemic, people rediscovered home-cooking. Doing so with tasty, fresh ingredients became hugely popular. A great interest in healthy food sources has also emerged. Onions have definitely secured a place in the vegetable top three. It's a favorite among both older and younger consumers.

Large volume risers
Bangladesh is a country on the rise. This season it imported more than 24 million kgs of onions. That puts it in 12th position. That, while India has fallen back. And Pakistan even dropped out completely this season. But the Philippines are also growing steadily. They climbed from 13th to seventh spot this season. Indonesia, too, is almost back to its 2018/19 season level.

That country took more than 17.5 million kgs and is thus in 15th place. Israel is also finally gaining a permanent position. At number 13, it bought 22 million kgs of this product. The Top 20 shows that the Far East is positioning itself as an important trade partner. That's in the ever-growing Dutch export market.

The Ivory Coast remains another notable volume riser. This year too, exports to that country are up by more than 20%. And it seems Senegal is gradually losing its spot at the top. But other West African countries are also on the rise. These include Mali, Gambia, Congo, Cameroon, and Burkina Faso. Like Asia, the African continent is experiencing unprecedented population growth. It needs enough safe, healthy, affordable food, also at times when there's no local crop.

Export hero
"The Netherlands can jump in when there's an urgent local need for onions. It's great that we can provide sufficient healthy food for everyone across the globe. Ninety-two percent of the world's onion production is grown for and consumed by the local market. Yet, the remaining eight percent seems to be essential to supplement local shortages worldwide. The Dutch onion chain has a 20% market share. It's, therefore, played a prominent pioneering role in this for decades."

Closer to home too
In Europe, the export season in all of the Netherlands' neighboring countries also shows continued, sustainable growth. Population stabilization and self-sufficiency do, however, play a significant role. Despite Brexit, Great Britain showed a significant increase compared to last season. It took more than 100 million kgs.

"That's a staggering but vital amount. The UK is far from self-sufficient. People still want to buy fresh onions. The same is true for Ireland, Belgium, Spain, Portugal, and Sweden. Almost all the Scandinavian countries show relatively substantial growth," says the Association.

Central America and the Caribbean
Central America is particularly well-represented by countries like Nicaragua and Honduras. Nearby Guyana and Suriname are also steadily joining in. Unfortunately, exports to Panama came to a complete standstill this season. Costa Rica hasn't yet welcomed onions from the Dutch export hero either. Together, the countries and islands in and around the Caribbean region are a stable, sizeable client. They appreciate Dutch onions.

Notable newcomers
Japan, Azerbaijan, and Canada are newcomers. Besides these, Tunisia and North Macedonia have also come knocking. Australia has even quadrupled its Holland Onion imports. That may not be groundbreaking in absolute volumes. But, there's an old merchant saying, "He that spurns the small, doesn't serve the great." That applies here too.

In the Middle East, Bahrain continues its climb. Hong Kong is a new sales area in the Chinese region. It's fast reaching a million kg. Finally, it's particularly worth mentioning that Dutch white onions are currently trekking through China. 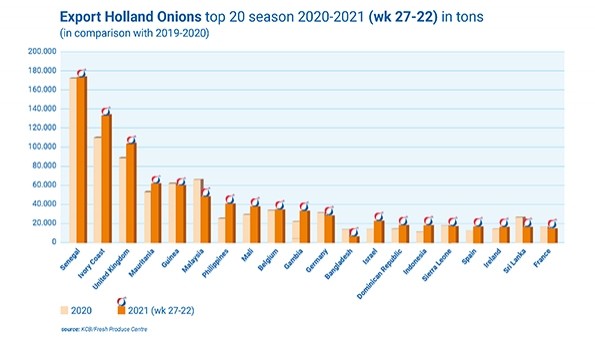