Melon exports from Uzbekistan are soaring

We are at the start of a season of peak exports of melons from Uzbekistan. This has become clear due to two factors: a 10-fold decrease in wholesale prices on the domestic market from the end of May to June 17 and a noticeable activation in the second half of last week of exports of melons to foreign markets. In the past 4-5 days, the number of requests for trucks for transporting melons to export markets has many times exceeded those of the first half of June.

In the current season, the price dynamics for melons in Uzbekistan in the first half of June are repeating last year’s picture. In addition, the dynamics of melons prices on the Russian market is also almost the same as last year, although prices there are much lower. Since almost all Uzbek melon is exported to Russia directly and through Kazakhstan and Kyrgyzstan, the difference in prices between the markets of the Russian Federation and Uzbekistan determines the start of mass export of melons. 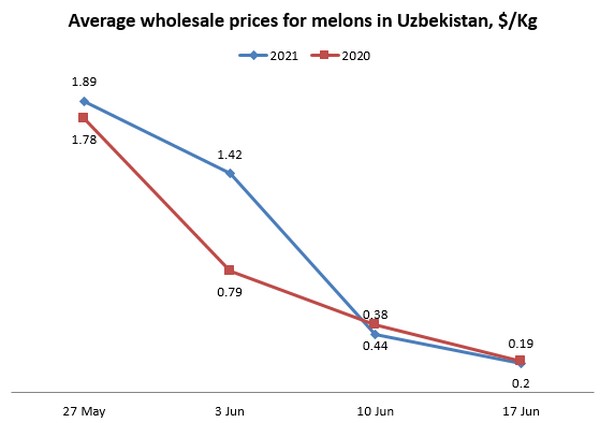 As reported on east-fruit.com, the decrease in wholesale prices for melons in Uzbekistan by almost 10 times over the past three weeks and their stable prices on the Russian market over this period sharply increased the price gap in Uzbekistan and Russia.  At the end of May, the difference in melon prices on the markets of the Russian Federation and Uzbekistan was only 30 US cents, which barely covered the delivery costs. Therefore, trade was inactive and not very profitable.

Wholesale prices in Russia are now already $ 1.75 per kg higher than in Uzbekistan. This means that the sale of melons with such a gap becomes very profitable and covers not only transport costs, but also high-quality sorting, packaging, processing and the margin of many intermediaries.