Northwest growers weather the storms and push on into cherry harvest

Cool weather has continued to slow the start to the Northwest cherry harvest over the past week. Fortunately, that allowed many growers the time to mitigate any effects from several rain storms that passed across Washington state. Quality and color remain exceptional, but sizing has been a challenge in some early variety orchards. "Our harvest has begun to shift into Bings, and with that we are seeing a return to more typical sizing for the Northwest," says a release from Northwest Cherries. "We anticipate manageable growth in volume over the next week, in alignment with kickoff promotions worldwide." 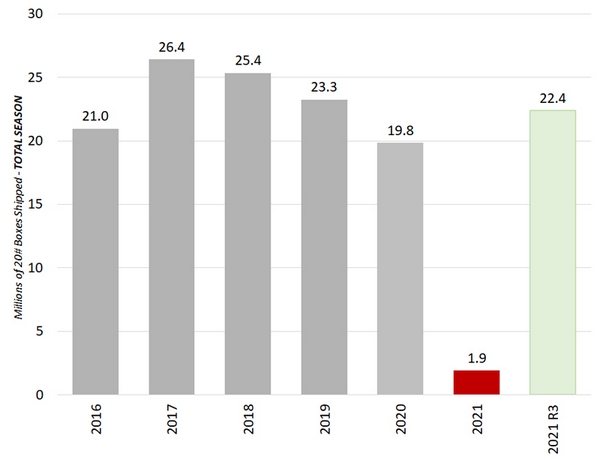 2021 round 3 crop estimate: 22.4 million boxes
The action of two high pressure ridges brought an atmospheric river of subtropical moisture over the Northwest for much of the past week. Fortunately, cool daytime temperatures followed most of the rain events, which allowed growers the chance to dry their cherries. Nonetheless, these events have further slowed the development of the front end of the Northwest crop. However, the high pressure ridge over the Pacific has since moved ashore, pushing the moisture out of the region and bringing with it clear skies and warmer temperatures. We expect this to bring about an uptick in harvest momentum. 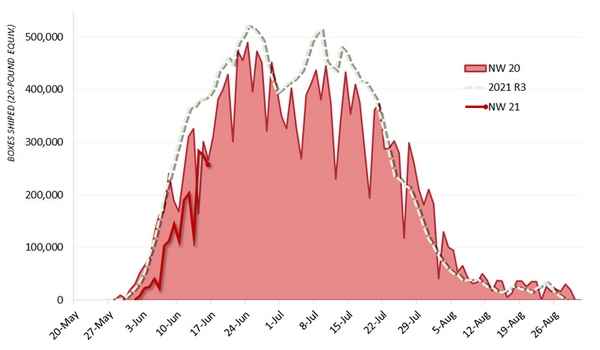 As growers move into more orchards and more varieties, we are seeing some increase in row sizing. As harvest began, packouts of smaller row sizes were more plentiful than estimated during the pre-season. There are certainly lots of orchards with big fruit, but the chart below illustrates the story with a bit more detail. While we've seen more 9.5 row packed this season compared to last year, we're also seeing more 11 row but less 10.5 row. It's just a reminder that Mother Nature is truly in charge of each season!

Fortunately, even those cherries coming in at smaller sizes are still packing out with exceptional color, taste and sweetness. Optical sorting technology has produced a more uniform consumer pack, which ultimately means those consumers taking home a bag of Northwest cherries will find that dessert quality they're seeking.

The 2021 Rainier crop is off to a great start, with demand especially high for the super-sweet variety. Winds produce a particular challenge for yellow cherry growers, but at this point we are still expecting to pick and ship a little over 2 million 15-pound boxes this season. 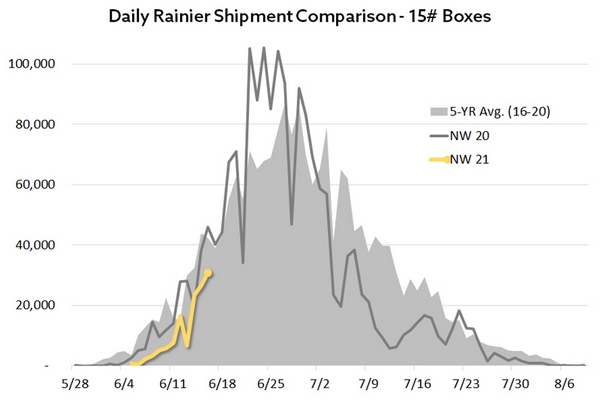 The chart below gives a 2 year overview of the Pacific coast cherry crop, as well as the Northwest's Round 3 estimate projected as a crop curve. (Click to enlarge) As evidenced by the dark red line of 2021's actual shipments, the pace of harvest has slowed since the date of estimate, but the general distribution of volume continues to track along with the estimate. With a slower start, that will also push a few more cherry boxes into July's total. 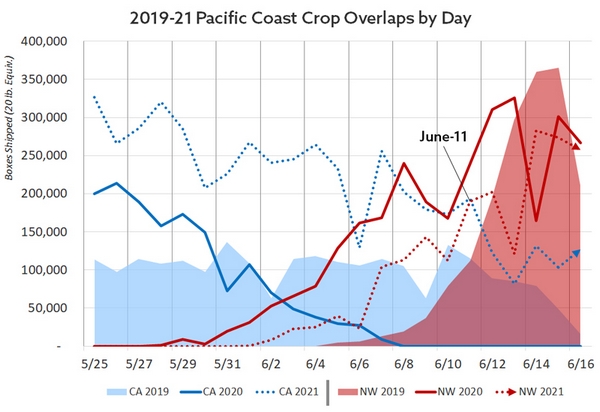 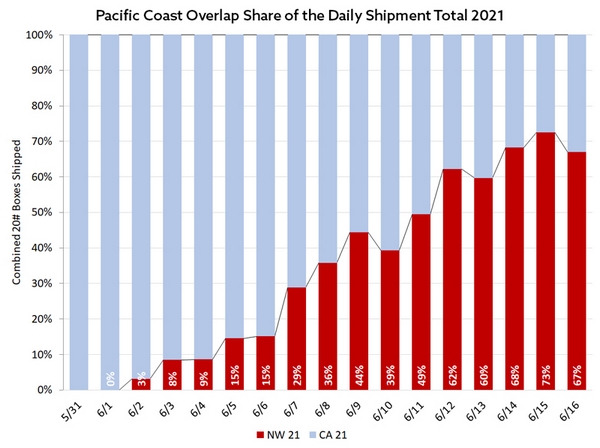