Cherries are an expensive fruit with a high value and excellent flavor. They have become very popular with young people in recent years, even trending online. Imported cherries are large and juicy with firm fruit flesh and are easy to transport. Cherries have quickly established themselves as one of the major import fruits in the Chinese market in the last few years. 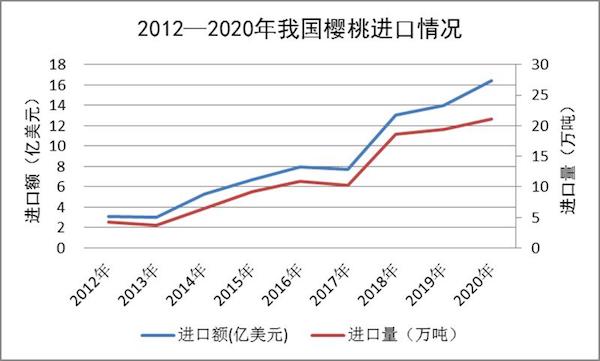 In addition, China has lowered VAT on Chilean cherries to further facilitate Chilean cherry supply of the Chinese market. In 2017, China and Chile signed a revised agreement that simplifies trade procedures. These new regulations improved the efficiency of customs clearance for easily-spoiled fruits such as cherries. The Chilean cherries can reach Chinese consumers within 30 hours. In 2020 Chile increased production and the price declined, which helped Chinese consumers celebrate "cherry freedom" during Spring Festival [January 25, 2020].

Domestic cherries have also gained popularity in the Chinese market because of their unique flavor. The overall surface area devoted to cherry plantation in China has grown nearly tenfold over the last 30 years, but still there is not nearly enough supply to satisfy domestic market demand. There is a huge window of opportunity in the Chinese cherry market and imported cherries are likely to dominate the Chinese cherry market for a long time to come.