As the number of organic farms increases, more agricultural land is farmed organically - here there is a 69% increase from 941,500 hectares in 2010 to 1.6 million hectares in 2020. The share of organically farmed land in total agricultural land - a sustainability indicator often considered - has risen from 5.6% to 9.6% over this period. In terms of the German states (excluding city states), the highest shares of land for organic farming in 2020 were found in Saarland (18%), Hesse (15%) and Brandenburg (13%). In Lower Saxony (5 %), North Rhine-Westphalia and Schleswig-Holstein (both 6 %), proportionately significantly less land was farmed organically. 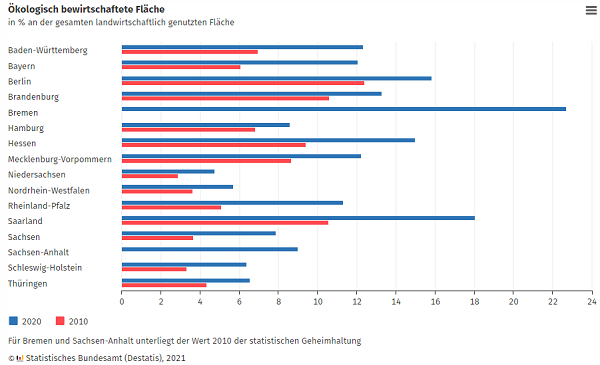 Permanent grassland, plants for green harvesting and legumes more important in organic farming
Certain crops are more important in organic farming than in conventional farming: for example, permanent grassland - mainly meadows and pastures - accounted for more than half of the organically farmed area in Germany in 2020 (52%), followed by arable land with 46%. When it comes to cultivation on arable land, cereals for grain production dominate organic farming at 48%, but crops for green harvesting are more important than in conventional farming with a share of 32% - as are legumes for grain production (9%). These include field beans, sweet lupins and soybeans.

Structural change continues: Number of farms decreases, sizes increase
In 2020, the total number of farms in Germany was 262,800. This represents a reduction of 36,400 farms (-12%) compared to 2010. At the same time, the average size of farms has increased: Whereas in 2010, farms managed an average of 56 hectares of farmland, in 2020, the average farm size was 63 hectares. The average farm size varies considerably from region to region, ranging from 25 or 36 hectares in Hamburg or Baden-Württemberg to over 250 hectares in Mecklenburg-Western Pomerania and Saxony-Anhalt.

Cultivation ratios with regard to crop types almost unchanged compared to 2010
At 16.6 million hectares in 2020, the total area used for agriculture in Germany has changed only slightly in the period since 2010
(-109,000 hectares, a decrease of less than one percent). Arable land accounted for by far the largest share of total agricultural land at 70% (2010: 71%). Permanent grassland took up about 29% in 2020, and permanent crops accounted for 1%. Cultivation on arable land was dominated by cereal crops, which accounted for 52% of the area, followed by the cultivation of plants for green harvesting (27%).

Further information on land use in the form of an interactive StoryMap can be found on the joint statistics portal of the federal and state governments.

A total of ten interactive StoryMaps are published on the topics of arable farming, livestock, organic farming, leases, labor and occupation, farm types and farm succession, viticulture, fertilizer, soil and irrigation, and livestock.