"The demand for melon and watermelon has significantly increased in Europe"

The Spanish melon and watermelon campaign has been moving to the Region of Murcia at a time when the improvement of the weather on the continent is creating more favorable conditions for the consumption of both fruits. Left behind is a difficult first part of the season in Almeria, which has been marked from the beginning by a low demand in the export markets and low prices at origin, with almost continuous drops.

"The weather in May and the first part of June has generally not been favorable in Europe. It has been quite cold, and there was still a great lack of activity in the food service sector, which is now reopening, so although the product was there, consumption was not," says Pedro Navarro, commercial director of the Murcian company Gregal. "Now, coinciding with the start of the campaign in Murcia, the weather in Europe has changed completely. It has started to become warmer in all countries in general, and this has given a significant boost to the demand for melons and watermelons, so prices have also increased." 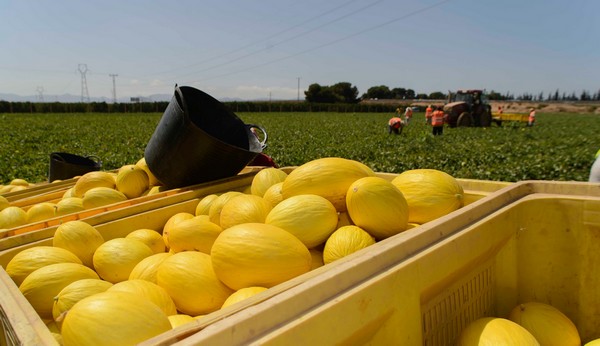 According to Pedro, the production in the Region of Murcia is behind schedule as a result of atypical inclement weather in the spring. It has been rainy, with many cloudy days, which took a toll on the flowering and reduced the yields of the earliest varieties.

"In our case, yellow melons arrived a little later. We have started earlier with the Cantaloupe and Galia melons, since we have part of the Cantaloupe productions in greenhouses seeking precisely to be able to start the campaign a little earlier, but this week we have started with the yellow one with some normality. However, we won't reach cruising speed until the end of next week or even the following week," he says. "In general, we are 10 to 12 days behind schedule, which is what is causing us to be at 50-60% of our normal volumes right now."

In fact, the delay in the campaign is widespread in the Region, where there has also been a slight reduction in the area planted with melons and an expansion of that devoted to watermelons. "Due to the pandemic, last season's results were not what we expected, and I think that this year companies in general have been cautious, not doing experiments or increasing their volumes," he says. "In our case, we have stayed the same with the yellow melons, while with the Cantaloupe and Galia we have dropped a little compared to last year, although not significantly compared to the volumes we normally do." 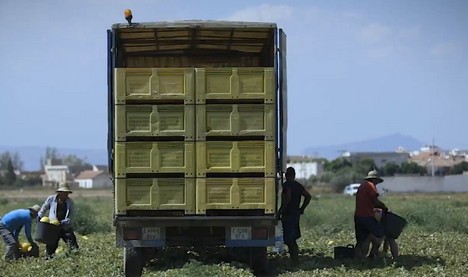 Gregal's annual production amounts to some 40 million kilos of Galia, Cantaloupe, yellow and Piel de Sapo melons. Almost all of these (between 85 and 90%) are intended for export. Gregal's fruit reaches consumers in more than 20 countries across Europe, where the recovery in the demand has given prices a boost at the beginning of the season. "Galia and Cantaloupe melon prices currently stand at rather good levels. Those of yellow melons too, although to a lesser extent," says Pedro. "Right now, all melons are marketed at prices you can work with."

"The Piel de Sapo is gaining ground in European supermarkets"
Although the Cantaloupe, Galia and yellow varieties are traditionally the ones intended for export, the Piel de Sapo melon, the most popular in Spain, is gaining more and more ground in European supermarkets. However, according to the professional, introducing the Piel de Sapo melon in Europe is a slow process, "and not only because of the fact that there are many melon varieties, but also because of consumption habits. In many places, melons are consumed as a fruit or as an accompaniment to a main dish, as is the case with the Cantaloupe or Charentais, while the Piel de Sapo is 100% a dessert. However, its export is certainly growing significantly every year."

"There is also another factor, which is that, unlike in Spain, where large melons weighting 2.5 kg and up are in demand, supermarkets in Europe want small sizes weighting less than 2 kg. In our case, we produce large Piel de Sapo melons that are ideal for the domestic market, so the share we export is very small. However, there is an increasingly higher demand, and we receive more requests for small Piel de Sapo melons than we are able to cover," he says. "In the past, only the small-sized melons that were left in the plots and which were not suitable for the domestic market were exported, but now seed houses are working very hard to produce those small-sized Piel de Sapo melons, so that large volumes of them can be supplied. It is undeniable that there is a growing demand," says Pedro Navarro.