The deliveries of apricots expanded: Spanish fruits apparently dominated over Italian ones. French and Turkish products did not go beyond a supplementary status. Demand could not keep pace with the increased availability. Stocks could mostly only be avoided by retailers reducing their previous demands.

In Hamburg, this particularly affected products that were too small, while in Munich it was mainly articles with weakening organoleptic properties that were discounted. In Berlin, the quality of Spanish batches was quite inconsistent, which explained the wide price range, from €1 to €3.50 per kg. Exclusive French Colorado there cost a minimum of 3.80 € per kg, but this was not always accepted by customers. In the capital, Italian offerings usually tasted mealy, so they had to be sold at special prices. 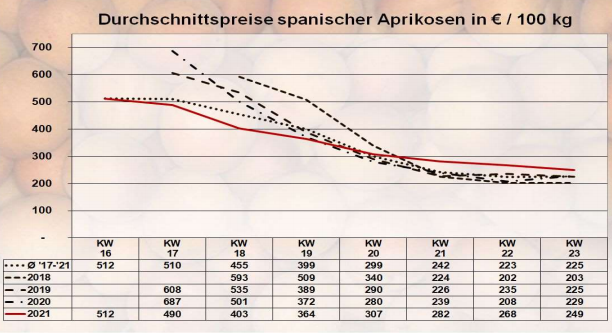 Apples
The domestic, Italian and French lots were continually shrinking. Their condition was not consistently convincing and so concessions had to be made on various occasions to ensure sales did not slow down. In Hamburg, European offerings continued to score in terms of quality, making it difficult for overseas imports to gain a foothold on the market. In this segment, New Zealand shipments were dominated by Chilean and South African ones. Royal Gala was the most frequently accessed, but Braeburn and Jazz were also increasingly available. The first New Zealand Pink Lady arrived in Frankfurt. In general, marketing was fairly quiet. Distributors rarely had cause to significantly modify their prices.

Pears
Chilean and South African imports apparently continued to set the tone, with Argentinean pears playing second fiddle. Packham`s Triumph, Abate Fetel and Trout were ready in the first place. Demand was not particularly strong and was easily satisfied. Trading was quite unexciting. Prices mostly did not change, also because the availability had expanded. Only conditionally weakening lots had to be sold at discounts. Conference from the Netherlands and Belgium, as well as Abate Fetel from Italy, did not go beyond a complementary character; their season was nearing its end.

Table grapes
The deliveries from Italy obviously expanded, but in Cologne they had only a complementary character. On various occasions, Black Magic and Victoria were not consistently convincing in terms of taste. Nevertheless, the fruits were quite popular. Imports from Egypt grew: Flame Seedless and Prime Seedless, Early Sweet, Thompson Seedless, and Starlight provided a number of varieties. Chilean Crimson Seedless and Thompson Seedless as well as Indian Thompson Seedless lost relevance and gradually disappeared from the ranks. Demand was rather weak and could be satisfied without problems. Prices remained mostly constant. In Hamburg, supply became cheaper due to volume; traders thus tried to avoid stocks and accelerate placement.

Strawberries
Domestic items dominated. Batches from Italy, Greece and Belgium appeared only sporadically and, like Dutch, Polish and Spanish products, were only of a complementary character. Supply grew rapidly, and domestic unloading in particular intensified massively. Interest could not keep pace with this. Sellers were therefore forced to adjust their previous demands downward if they wanted to prevent overhangs. In addition, returns from food retailers appeared in Hamburg, which made it even more difficult to market the regular batches. There, however, the price picture turned positive again towards the weekend. In Munich, articles with weakening conditions had to be sold at noticeable discounts.

Cherries
Spanish deliveries predominated here. Italian, Turkish and Greek lots followed in terms of importance. The first domestic fruits appeared in Berlin, Cologne and Munich, but were quite expensive. Increased shipments meant that traders were rarely able to maintain their prices. Towards the weekend, Greek goods appeared, which cost only 2.50 to 3.50 € per kg. In Munich, products from Turkey were largely able to maintain their high price levels thanks to a uniform presentation. In general, the quality of the range rarely left anything to be desired. In Berlin, Italian ferrovia were in short supply. The Spanish competition was therefore able to keep its previous prices.

Peaches and nectarines
Spanish arrivals outweighed Italian ones. Turkish imports arrived exclusively in Frankfurt. First French products are expected to appear in week 24. Availability apparently increased. It was sufficient to meet demand. Accommodation was limited in Cologne, but quite adequate in the other places. The summer weather noticeably accelerated the turnover. Prices nevertheless tended mostly downward as a result of the extended supply. Paraguayos and Platerinas from Spain were generally well received.

Lemons
Spanish offers, which were still unrivaled last week, faced South African, Turkish and Italian products. However, these made up only a small part of the assortment and their appearance had little effect on the prices of the tone-setting Spanish items. In some cases, these even rose slightly, as demand increased.

Bananas
The ripeners had sufficiently matched their supply to the sales options. Demand was not particularly strong in this regard. Prices frequently dropped, though never for the entire range.

Cauliflower
Domestic batches dominated, with French, Dutch and Belgian rounding out the action. Availability had expanded and was sufficient to meet demand. If distributors wanted to avoid surpluses, they had to successively reduce their prices. Demand was simply too weak for very brisk sales.

Lettuce
In lettuce, domestic batches outweighed Belgian goods; Polish lettuces did not get beyond a supplementary character. Business was quiet, as interest could be satisfied without problems thanks to expanded supplies. Overall, prices trended slightly downwards. Iceberg lettuce mainly came out of Germany and the Netherlands. The Spanish season ended unspectacularly. In this sector, too, marketing continued without any particular highlights. Price changes were observed in Cologne, where Dutch lots became cheaper and domestic lots somewhat more expensive. Colorful salads from Germany became a little cheaper in certain areas, as the supply was too abundant. Decreasing valuations were also observed for endives; these originated in Germany and Belgium.

Cucumbers
The range of snake cucumbers continued to consist exclusively of domestic, Dutch and Belgian offerings. The supply situation had not changed significantly. Demand could be met without difficulty. Prices trended downward on various occasions, which improved the accommodation possibilities posthaste. In the case of mini cucumbers, valuations crumbled in spots. Domestic and Dutch products predominated in this segment. Price reductions were due to a shortage of supply, but only occurred locally.

Tomatoes
As before, Dutch and Belgian deliveries dominated the scene. Italian and domestic fruits supplemented, Spanish and French completed the offer. Availability was sufficient to satisfy demand. This had increased slightly in some areas, but this did not have a fundamental impact on prices. Prices were quite mixed: in Munich, for example, cherry tomatoes became more expensive, while in Cologne they became cheaper. There, Belgian beef tomatoes became cheaper. In Hamburg, prices remained constant, provided the quality of the products was convincing. In Munich, distributors had to lower their prices for Belgian and Dutch panicles in order to speed up processing.

Sweet peppers
Dutch deliveries dominated the scene, more so than Belgian ones. Imports from Turkey rounded out the assortment, as did domestic batches that appeared only sporadically. Intensified supply met with rather weak interest. Prices therefore often knew only one direction: down. Above all, the yellow and red cultivars became cheaper, while the green articles even became somewhat more expensive in some places. However, with prices demands of €15 per 5-kg carton, in some cases customers just refused to buy anything. In Berlin, promotional campaigns by the food retailer reduced the quantities on the market, which is why prices rose significantly.

Asparagus
The end of the season is already in sight and a certain customer saturation could not be denied. Demand was somewhat limited. In contrast, availability had once again increased. Discounts were therefore the order of the day, and these were sometimes quite substantial. Stocks could not always be avoided, especially at the beginning of the week; goods from the previous week were still available, which initially went for low prices. But even on Thursday and Friday it did not come fundamentally to increases in price. Volume-induced rising prices were registered in Berlin, especially for green asparagus.