By now, Italian table potatoes are outweighing Cypriot imports. Greek Spunta and Moroccan Nicola supplemented the markets with selective, small quantities. Domestic deliveries increased. An oversupply was observed in some places. As a result, prices often crumbled, especially those of Cypriot and Italian imports. In the case of ware potatoes, domestic batches continued to dominate. Availability was continuously limited. Nevertheless, it was sufficient to satisfy the constant interest. Therefore, valuations often remained at the level of the previous week, the BLE reports. 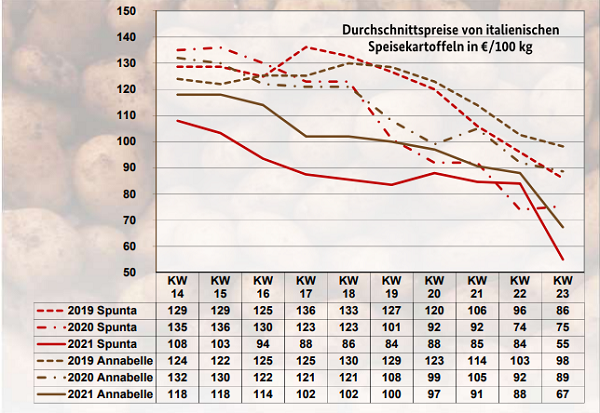 Rhineland-Palatinate: Palatinate sacks become slightly cheaper
The Rhineland-Palatinate Chamber of Agriculture announces that only remnants of alternative German table potatoes can be found in the ranges of retailers. In addition to Spanish, Italian and Egyptian early potatoes, French goods from last year's harvest are slowly running out. Matured early potatoes from the Palatinate can be expected from next week. Palatinate bagged potatoes will be slightly cheaper. Consumer price levels are unchanged from the previous week. 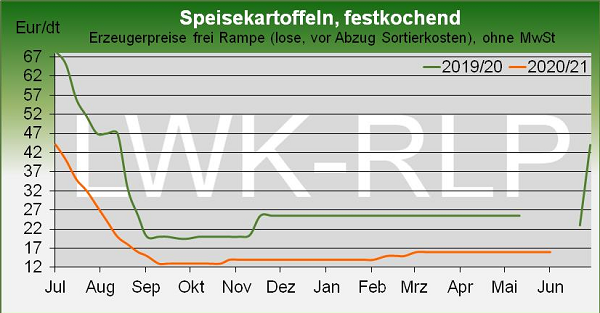 Hesse: Subdued demand
A subdued demand characterizes the current situation on the potato market. As a result, the clearing of remaining stocks is proceeding more slowly than initially expected. Attractive lots are still being marketed and should be available for another two to three weeks. Although imported early potatoes now predominate on the shelves of food retailers, interest remains subdued for taste reasons. Local early potatoes, which are still very loose-skinned, are being offered at producer prices of around EUR 84/dt and are thus at the same price level as in previous years, says the State Office for Agriculture in Hesse. 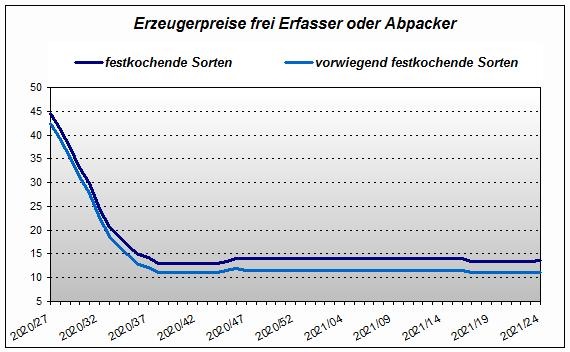 Lower Saxony: decrease in fresh potato consumption
The loosening of Corona restrictions coupled with the current warmer weather has diminished the fresh potato consumption somewhat, according to the farmer federation northeast Lower Saxony. In addition to this, the last potatoes from cold storage have now been marketed. The next listing is expected to take place in August 2021.

Schleswig-Holstein: First clearings of early potatoes
There are still alternative potatoes being sold at unchanged price levels. However, the local trade is predominantly dominated by imported early potatoes from Israel, Cyprus, Spain and Italy. Tubers from Portugal are also available, on a small scale. In addition to imported potatoes, German early potatoes are available as well. The majority are loose-skinned goods. Quality is described as good. It will be some time before local tubers from 2021 will be available in food retail.

Very sporadically, the first early potatoes have been harvested in this country. However, in the potato sector, vegetation growth is about 3 weeks behind that of average years, resulting in lower yields. In some places it was too cold when the tubers were planted, resulting in emergence problems. Warm temperatures and sunshine have recently helped to advance the development of the plants, but in isolated cases it has also been too dry or there have been other problems such as soil wetness, reports the Schleswig-Holstein Chamber of Agriculture.