In the Netherlands, the last of the Xenia pears were sold in early May. That marked the end of this club pear variety's sales season. Last season, Xenia pears yielded 9,600 tons. Of these, 600 tons were grown organically. "The pears' quality and size were generally good," says Raymond van Ojen of the Dutch company, Xenia Europa. "Even at the end of the sales season."

The season started in October. And the last pears were delivered at the beginning of May, as planned. The Xenia Growers Association (TVX) wants to ultimately deliver these pears up to and including July. But, due to good market demand, they haven't yet gone beyond May.

Xenia pears have always been positioned to follow the Doyenne du Comice variety. "We've been successfully moving the sales season forward over the last three years. In the past two seasons, the largest upscaling has been between October and December." 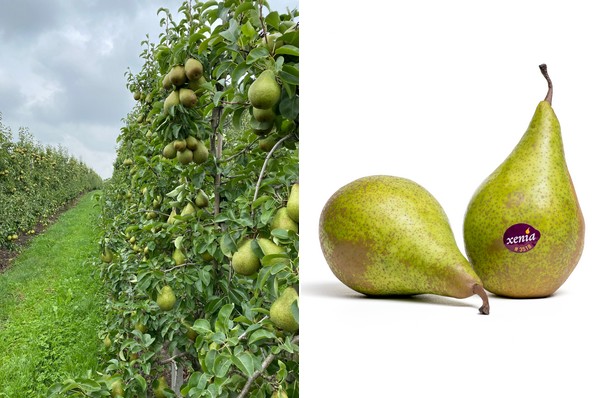 Upcoming season's expectations
The Dutch spring was cold. That resulted in an extended blossoming period in the Xenia orchards. So, the crop will probably be delayed by ten to 14 days compared to 2020. "We expect to start harvesting in late September. We'll begin selling in mid-October. The pears must be refrigerated for a while to develop a better flavor delivery. The first harvest estimate is 10,500 tons. We were concerned that the cold weather would reduce yields. But the orchards are looking good at the moment," continues Raymond.

Up to 20.000 tons within five years
Xenia pears sales are primarily concentrated in the German-speaking countries, Scandinavia, and the Netherlands. But Xenia Europa wants to expand sales to southern Europe in time. "We're still relatively unknown in those markets, especially in Italy and Spain. There's still a lot of potential there. We expect to increase to 20,000 ton within five to six years. That's why we want to intensify our current sales to southern Europe."

Xenia Europa exported to countries in Africa and Asia for the first time this season. "There's increasing demand from countries outside Europe. The Xenia pears' most distinguishing features are their display and shelf life. That offers export opportunities to distant destinations. A five or six-week transit time isn't a problem for these pears," says van Ojen.

75 members
Xenia Europa works with 75 Dutch and Belgian growers. "They currently have around 300 hectares in total in the two countries. We want to expand that to 500. With a normal harvest, that amounts to 35,000 tons."

There's, therefore, no planting ban, but it is regulated. "We continue to produce trees in a regulated manner. Acreage expansion is currently only taking place among the existing TVX members. Once there's no more interest there, we'll look into admitting new members. That's, however, not yet the case. The Xenia trees are already all sold out," concludes Raymond.