Uzbekistan: Peaches have to be much cheaper to compete with Turkey on Russian market

The beginning of the 2021 season for large peach exports from the Fergana Valley in Uzbekistan was characterized by relatively high prices. This means that the average wholesale price for peaches in the country is now on average twice as high as usual price at this period.

Peaches are the second most important source of export revenue in the fruit segment of Uzbekistan, after fresh table grapes. In 2020, almost 86,000 tons of peaches worth about $ 65 million were exported. Cherries brought even less revenue to Uzbekistan than peaches last year, so Uzbek growers are reducing apricot plantations in favor of peaches.

The bulk of Uzbek peaches is exported to Russia directly, as well as through Kyrgyzstan and Kazakhstan. Uzbekistan recently began to export peaches to Turkmenistan, while small volumes were exported to the UAE, Tajikistan, Afghanistan, Belarus and Mongolia. 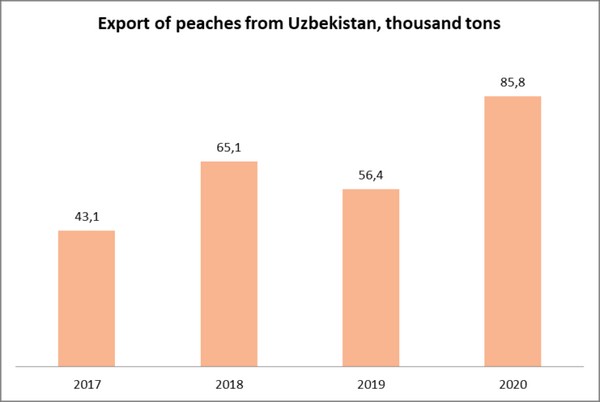 That is why an east-fruit.com article highlights that prices for peaches may begin to decline dynamically in the near future in Uzbekistan to stimulate export. It is quite possible that the price this year will even repeat the path of cherries price  that was much higher at the beginning of the season than a year earlier and ends the season at a lower level than last year. Otherwise, a high demand for peaches from Uzbekistan is not expected – after all, peaches from Moldova, Serbia and even the southern regions of Russia will become available on the market in a few weeks.