International trade has been facing an increase in maritime freight prices, which has been affecting the transport of goods between Brazil and the Arab market. Although Brazil’s largest trade flows are not with this region, as it focuses on China and US, those who work in the sector say that shipping prices to the Arab countries are high.

Datamarnews.com quoted executive director of Primo Logística, Augusto Ferraiol, as saying:  “It’s impacting everyone.” Primo Logistica operates with storage, national road transport, and national and international sea and air transport logistics and is focused on food. Operations with the Arab market involve imports from Egypt to Brazil and exports from Brazil to Egypt, the Emirates, Saudi Arabia, Libya, and Jordan.

Dataliner data shows a timeline of cargo movement between Brazil and Arab countries from 2019 on. 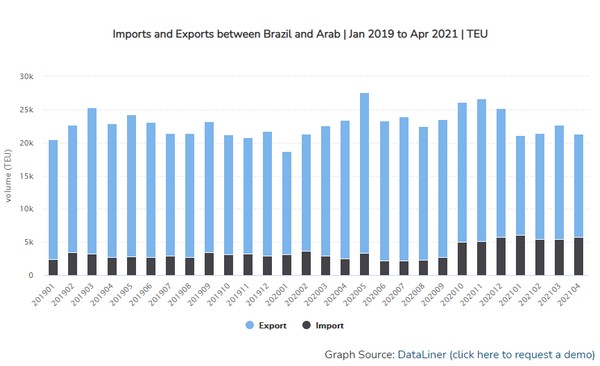 The high price of shipping has been felt mainly since the end of last year, but it is a story that began in 2020 with the beginning of the Covid-19 pandemic. Industrial stoppages in some regions of the world and difficulty obtaining raw materials in others changed the production volumes and addresses, affecting the scales and the coming and going of cargoes between countries. “It’s as if there was a misconfiguration of world trade,” says the Brazilian Foreign Trade Association (AEB) president, José Augusto de Castro.