As the season progressed, the wholesale price of conventional dessert apples for May, across all varieties, was on a par with the previous year, at EUR 0.89/kg, + 8.5%. Marketing volumes for domestic dessert apples had also settled at the previous year's level. The recent below-average temperatures had a positive effect on sales.

The stock level (organic and conventional) recorded by AMA nationwide as of May 1 was 38,427 t, + 13 % above the previous year. A clean end to the season is in sight. 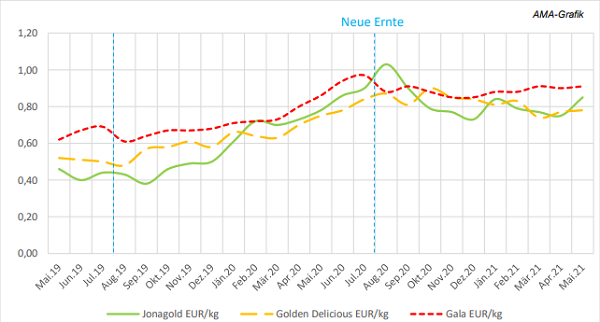 Underwhelming asparagus season slowly picks up speed
The cold spell in April and May delayed the main harvest of domestic asparagus by 2-3 weeks. While there was too little produce on the market a few weeks ago, stocks have developed rapidly under the influence of recent summer temperatures. Due to the late start, this year's season could be drawn out a little longer, provided there is sufficient demand. The total harvest of asparagus is expected to be one-third lower.

Forecast for domestic carrot area at previous year's level
The 2020/21 carrot season in Lower Austria is now virtually complete. The remaining stocks are mostly contractually fixed and will continue to be marketed domestically at an average of 47.50 EUR/dt at stable conditions.

No significant change in carrot acreage is expected for 2021. The area under cultivation is expected to shift further towards organic production. Estimates of organic carrot area assume a share of 20 to 25%.

Producer price for Austrian onion continues to rise
Little by little, the domestic onion season is coming to an end. Producer prices in Lower Austria were able to increase again towards the end of the month with an average of 28.00 EUR/dt.