Asparagus from Mexico movements expected to remain the same, with moderate trading

Now that more than a year has passed since the official beginning of the pandemic in the United States, somber reports are being issued highlighting just how bad the impact has been on the foodservice industry. A January 2021 Forbes report showed an estimated 140,000 U.S. restaurants closed for business in 2020, either by permanently ceasing operations or by temporarily reducing services, switching to delivery or carryout only, or other means.

With foodservice and related industries estimated to employ up to 1 in 10 of all employees in the country, the sector was projected to grow up to 10% annually before the pandemic hit but has instead contracted dramatically as all but those employees deemed essential have found themselves struggling to make ends meet. The foodservice sector’s hopes are very much pinned on this summer for a strong recovery as workers and customers alike return to everyday life after vaccination. 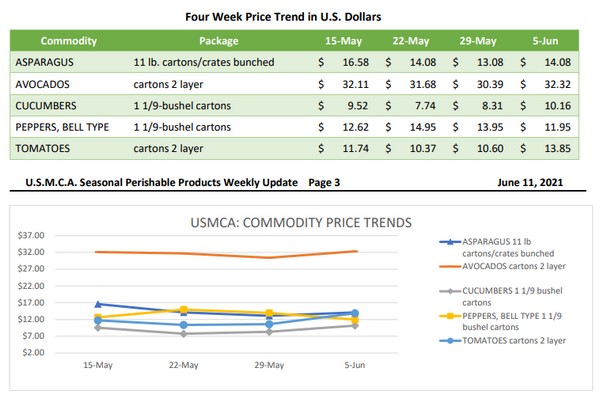 Asparagus crossings from Mexico movement is expected to remain about the same with moderate trading. Production and prices increased throughout the week until rain in the central growing region late in the week slowed harvesting and tightened supplies. Movement of Peru asparagus is expected about the same as shippers continue to skip ports in an attempt to get back on schedule. With aging product arriving to plentiful competition in the US, trading is slow and prices mixed, with quality and condition by container reported as variable, by air generally good. Movement of asparagus from the Walla Walla District and Lower Yakima Valley Washington is expected to decrease seasonally.

Trading was moderate early and slow later with a wide range in prices but prices generally unchanged and many present shipments from previous commitments or prior bookings. Movement from Michigan is expected to decrease slightly. Trading was fairly active at higher prices and product has been reported on nearby terminal produce markets.