The USDA issues an biannual report, published in June and December, which includes data on U.S. and global trade, production, consumption and stocks, as well as analysis of developments affecting world trade in apples, fresh grapes and pears.

Although total production is down, higher volumes of lower grade fruit are expected, boosting shipments to price‐conscious Southeast Asia markets and lifting exports to 1.1 million tons.  Imports are projected over 30,000 tons lower to 70,000 as COVID‐19 led to logistical disruptions, generating more cautious buying from importers. 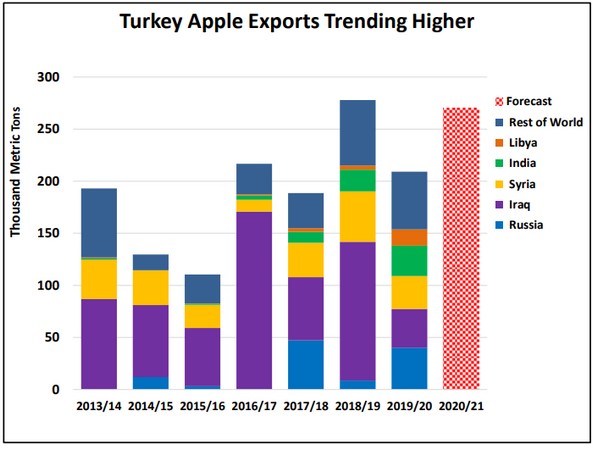 EU production is expected to rise over 500,000 tons to 12.2 million as greater supplies from an on‐year in non‐commercial orchards more than compensates for losses in weather‐affected commercial orchards. Exports are projected down 135,000 tons to 880,000 on fewer commercial supplies, while imports are also expected lower to 460,000 as reduced shipments from Eastern European suppliers more than offsets supplies from the Southern Hemisphere.

Turkey production is projected to surge nearly 700,000 tons to 4.3 million despite some hail in Kayseri and the largest apple production province of Isparta. Overall good growing conditions and plantings of new varieties coming into production are expected to generate a sixth straight year of growth. Higher supplies are expected to boost exports nearly 30 percent to 270,000 tons, especially to Russia and India.