In just under three weeks, this year's Bavarian asparagus season will be over again. Traditionally, the last spears are cut on St. John's Day on June 24. After a hesitant start to the season due to the weather, the farms are expecting a balanced season overall. However, it could have been a little warmer. 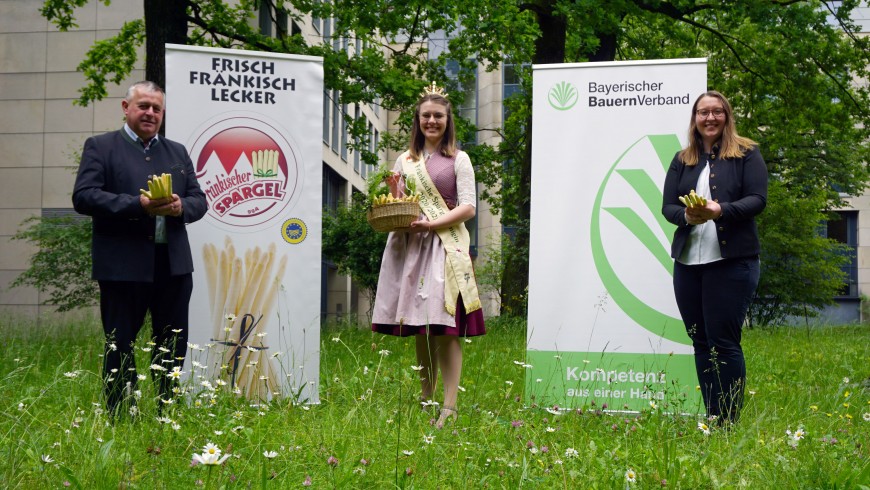 "We are quite satisfied with the season despite the much too cool temperatures," says Miriam Adel, chairwoman of the Franconian Asparagus Producers Association. Asparagus farmers harvested the first spears as early as the beginning of April, but the prolonged cold spell -until late May-  significantly slowed down growth. The rise in temperature at the end of May/beginning of June finally brought the turning point: "The asparagus plant needs warmth in the soil. The season has basically never picked up this late - we actually didn't consistently reach the temperatures that make the spears grow until June," Adel says. It wasn't until after the thermometer climbed to around 20 degrees that harvest levels were in the normal range. "Without the protective double covers on the fields, it would have been a very short and lean season this year. That makes these covers hugely important. By mid-May, harvest volumes were about a quarter below those from last year."

Franconian Asparagus Queen Christiane Reinhart is delighted with the confidence consumers have shown in the local noble vegetable: "Despite the closure of restaurants due to the pandemic and the cool weather, demand for local asparagus was good. The excellent quality convinced all gourmets."

The many rains in the first weeks of the asparagus season were good for the plants, because for some years now, drought has also been increasingly apparent in Franconia. "For the new planting of asparagus plants in particular, the rain was perfect this year! With sufficient water, the young plants thrive and can form their roots," says Adel.

With a total area of almost 4,000 hectares, asparagus cultivation is the most important vegetable crop in terms of area in Bavaria. The area of young plants has dropped to 550 hectares in the last five years. With 169 farms, most asparagus farmers are located in Franconia, but in terms of area, they account for only a small share of the Bavarian cultivated area with 881 hectares. Asparagus is grown in almost all Bavarian regions. The area under cultivation in Swabia is 1,346 hectares, in Upper Bavaria 894 hectares, in Lower Bavaria 842 hectares and in the Upper Palatinate 27 hectares.