Platano de Canarias - the only banana in the world with the European IGP quality seal - will be the official fruit of the Spanish Soccer Team throughout 2021. This has been jointly announced by the Royal Spanish Football Federation (RFEF) and the Association of Organizations of Banana Producers of the Canary Islands (ASPROCAN). 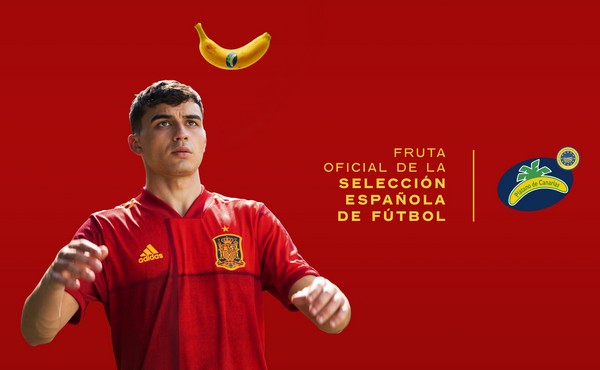 After signing this sponsorship agreement, Platano de Canarias became the Spanish Soccer Team's first official fruit. The RFEF and the brand will collaborate closely to promote healthy lifestyles and the consumption of bananas among the youngest fans throughout Spain.

More than 16.5 million Spanish households eat Platano de Canarias throughout the year, a product that the Spanish appreciate for its differentiated quality and its health benefits.

Platano de Canarias seeks to continue advancing in the promotion of healthy eating and sport, mainly among the youth, and the National Soccer Team is an outstanding collaborator to achieve this.

Platano Pedri, an exceptional ambassador
The young international player Pedri signed an agreement with Platano de Canarias to be the exceptional ambassador of this healthy project for the next few years. A young player, with exceptional quality, and a unique talent. Characteristics that are parallel to the qualities that differentiate the banana produced in the islands and that are united by a very special bond. 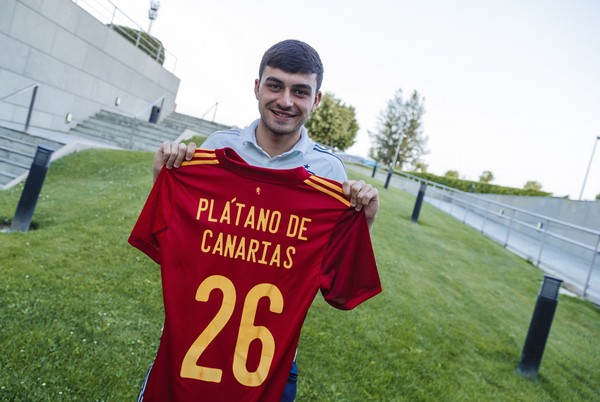 The link between Pedri and the popular fruit of his homeland goes beyond the new project announced today, as the Canarian footballer has worn, for good luck, an emoticon of a banana next to his name on his boot since he began his professional career. It's an anecdote that has attracted a lot of attention from his teammates.

The player and Platano de Canarias now join forces with the purpose of encouraging younger fans to consume this fruit on a daily basis.

Pedri, the Spanish Soccer Team player: “I am delighted to be part of this project because I am a great fan of this product from my hometown. Platano de Canarias is my childhood, its flavor that takes me back to my origin... And it's delicious!"