The Northwest Cherry Growers' Field Estimate team has compiled a third ("Round 3") projection for the 2021 Northwest crop.  Following up on the first two rounds of estimation, this 22-person field team looked at changes to fruit set and development across their orchards as well as the surrounding area. Within this window, cherries proceed through several more periods of fruit development or drop which influences the overall volume dynamics and estimated harvest timing.

This third round estimate for the total Northwest fresh crop remains effectively unchanged from Round 2 and still stands at 223,700 tons.  If accurate, this would be about a 17.7% increase over last year’s 19.8M‐box crop, and a 5.7% decrease from the 2019 23.3M‐box crop. Even though the net result was a negligible change to the fresh market estimate, there were significant changes within different districts and growers. 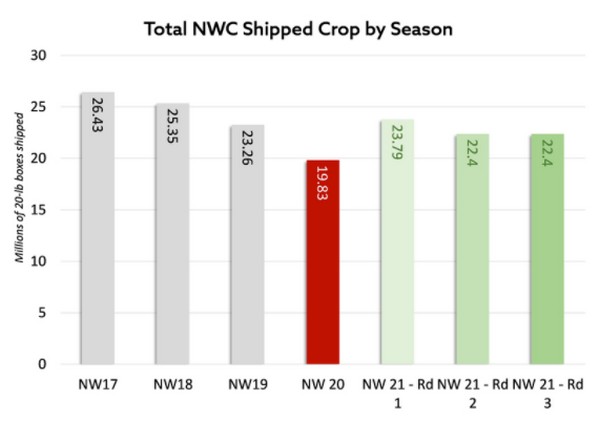 Yellow Cherries: Reports from our Rainier/yellow cherry growers have been very promising.  The cherry's yellow skin is the most susceptible of all varieties to late spring weather, but the set on the trees so far appears to be the making of a phenomenal crop.  In response to surges in demand from largely younger consumers, our Rainier growers have been committing a tremendous amount of effort to gently increase the Northwest's overall yellow cherry yield.  The Round 3 estimate for 2021 actually increased a bit from the Round 2 number, and either way is on course to produce more promotable volume than last season. 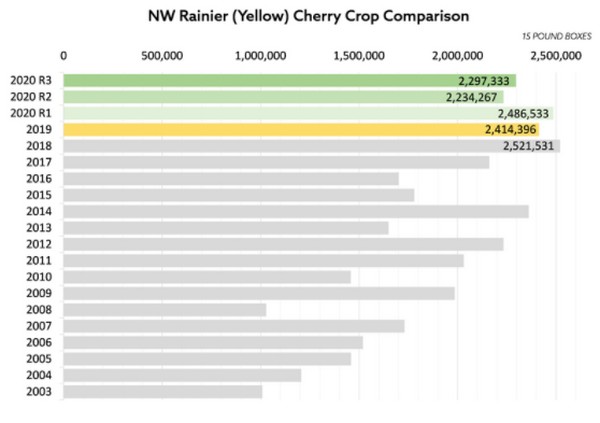 Crop Timing: In our previous updates, we called attention to the fact that within several of our earliest regions the degree day build up was identical to last year, which saw harvest start on the 28th of May.  The initial reports for the 2021 harvest show the same date, with the first day of reported shipments coming on the first. This year was always expected to see a slightly slower start, which was furthered by a recent several-day heat wave across many parts of the Northwest.  While the forecast did push harvest ahead in a handful of orchards, it required most others to pause.  However, cooler weather has largely returned, and with it an increase in harvest momentum. 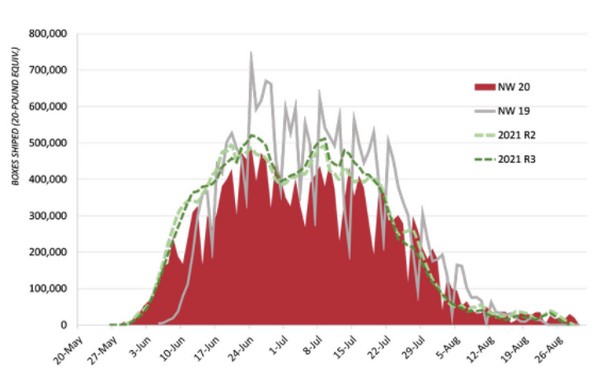 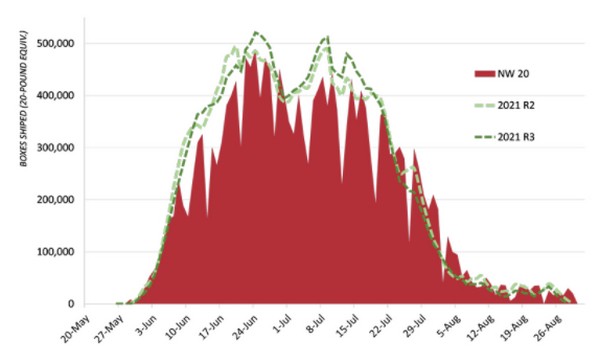 The expected June volume remained essentially unchanged between our second and third rounds of estimates. We expect to see a strong uptick in volume in the second week of June, leading to a traditional peak around the 24th of month.  Daily volumes should remain steady, albeit smaller, through a second peak around the 9th of July and will maintain promotable volume into August. In fact, rough modeling shows the Round 3 crop projection with daily volumes in mid-June just over the 5 year-average...however, following the first peak the estimate is typically under that same average curve for the rest of the season. 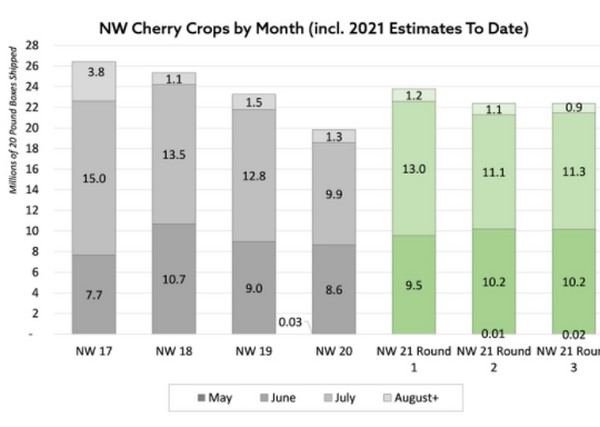 Based on the best information available at this time:

The accumulation of heat units so far this year suggest a longer crop, with more typical distribution between the districts than we've seen in some recent seasons. That bodes well for a steady crop volume once momentum is achieved. However, the generally optimal weather that drove the late May start to our crop did put a number of growing regions in danger of late frosts and wind storms. The combination of those factors has tempered overall crop size expectations, but unfortunately that's not the only factor that's taken a bite out of the Northwest's production.