Inma Sanfeliu, president of the CGC: "It is a difficult destination, but a potential way to reduce dependence on the EU"

A first experimental shipment of nine containers (about 242 tons) of Spanish Valencia oranges has recently been loaded at the facilities of the Port Authority of Castellón for them to be shipped from the Port of Valencia to India.

In the same week, another ship with another two containers departed to the same destination. All this is being done in the framework of a joint initiative promoted, led and coordinated by the Citrus Management Committee (CGC), which has also involved a considerable effort for the 10 participating operators, which have received financial assistance from the Valencian Regional Government's Department of Agriculture. But this would not have been possible without previous work from the Ministry of Agriculture. The conversations carried out by this department and the valuable political and technical negotiation on-site from the Agricultural Council of New Delhi made it possible to authorize an experimental shipment in viable conditions, replacing the previously required cold treatment in pre-shipment by one in transit. 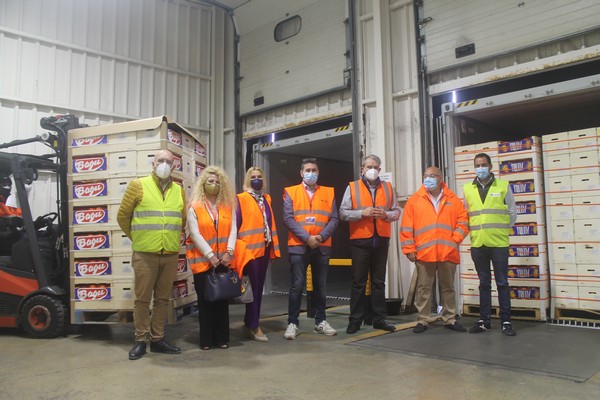 "If this mission is successful and the protocol is ratified in these terms, we will be able to open a distant market where the conditions are still very difficult; however, given its demographic potential and its rapid economic development, it could become a valid alternative for foreign trade with which to reduce our dependence on the European Union (EU)," said the president of the CGC, Inmaculada Sanfeliu.

The Regional Councilor of Agriculture, Mireia Mollà, highlighted the support of the Regional Government "to initiatives like this, aimed at improving the profitability of the citrus sector. If its viability is confirmed, it will give a boost to foreign business for all Valencian agricultural producers."

For his part, David Torres, General Director for Rural Development, who witnessed the loading together with the exporters, highlighted the opportunities that this initiative brings, "especially at a time when activity in trade fairs and business contacts are being recovered. In this regard, he mentioned the presence at the Shanghai Fair; also a distant market, but with "great interest in fresh quality products such as those of our territory," he said.

Since 2015, several exporters - also members of the CGC - had regularly been shipping some small volumes of oranges to this destination. In addition to the logical difficulties that this involved, another much more relevant complication was the Indian authorities making it compulsory for cold treatment to be carried out prior to the fruit's shipment for between 10 and 12 days and between 0 and 1.2 degrees. The fruit had to undergo this treatment before leaving and then endure another 29/30 days in shipment chambers until it reached its destination. The 11 containers that will now be shipped on their way to the Port of Nhava Sheva, in Mumbai, will undergo this preventive treatment - required to eliminate any trace of Ceratitis capitata (fruit fly) - for more days - up to 20 - but at a slightly higher temperature - 3 degrees or less - and, more importantly, this will be done in transit. This change, internationally approved and common practice in other similar markets, "is a key step to allow us to export oranges to India," said Sanfeliu.

India is the third largest citrus fruit producer in the world, after China and Brazil, but its huge population -nearly 1.4 billion inhabitants- leads to almost all of its harvest (around 14 million tons, almost twice that of Spain) being sold on the domestic market. They are major producers of mandarins, limes and lemons and oranges. Foreign imports are, therefore, very small, but the country's rapid economic development and the consolidation of a middle/high class with high purchasing power have recently given a boost to imports, namely to those of oranges. While in 2009 these stood at 10,000 tons, in 2019 the total came close to 80,000 tons.

"Finding a space for Spanish oranges will be complicated because it is a destination closer to Egypt, which is a direct competitor and already has a share of over 60% in that market, as well as a privileged position thanks to its much lower prices. To a lesser extent, already in the off-season, the market is also taken by South Africa, which also has much lower costs," says the head of the CGC. However, Sanfeliu believes that "in the medium term, or even in specific campaigns, India has the potential to be a great destination, because Spanish oranges enjoy a great reputation and we have the necessary know-how."