A Queensland banana farm is trialling a new bunch tagging system that uses GPS and radio frequency ID that allows for more accurate mapping of banana crops and yields.

Matt Abbott from Good Life Organics explained to the Australian Banana Congress in Cairns that the tag goes into the stork on the bunch when the bag is put on.

"It tracks the exact position that the bunch came from when it is hanging up in the shed," he said. "The tag gets scanned on the machine prior to putting it onto the bunch. When it is scanned, it records your position, and that position is what is used in the data reports. So, we get our report with all the marks throughout your block of all the tags that are put on each week. The next step is at harvest when the bunch is going through the shed, the tag is scanned again for the second time and weighed. I think this system is relatively simple to adapt to fit into what you're trying to do on-farm. So, it can be widespread through the industry with potential benefits to the grower."

Good Life Organics' farms are located in tropical Far North Queensland, surrounded by UNESCO World Heritage Rainforests and the Great Barrier Reef, and every banana they grow is 100 per cent certified organic. Through the Great Barrier Reef's Innovation fund, it is hoped that this project will also lead to better and more environmentally-friendly production. 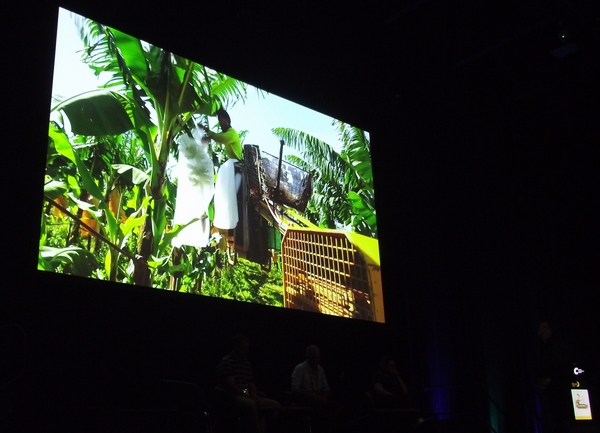 Photo: A demonstration video of the banana tagging system being played to the congress

"The thing that attracted me most to this project was to gather a bit more precise information about what we are doing," Mr Abbott said. "It also makes a few more jobs that we do more automated, so we are less reliant on people recording the numbers, and are able to add up the numbers electronically. This means we can make better decisions going forward. This trial has a lot of benefits; firstly, we can start to look more closely at our yield and if there is much difference across the paddock, or we need to look at our nutrient application. Putting it in the right spots is important, also from the whole sustainable practices side of things."

Other benefits, according to Mr Abbott, are getting a better idea of crop timing, and automating the information that is being collected on the farm.

"Our bagging reports will be automatically recorded, as well as bunch weight," he said. "Another benefit of this system would be from a traceability point of view. We can link the carton and pallet that it is loaded on right back to the specific point in the paddock. So, if you have issues, it can be pinpointed to a specific area."

At this point, Matt and his brother Ben have not had the chance to put the system through a harvest but have been busy installing the tags across the farm for the past 10 weeks. They are looking forward to seeing how the dots can be joined up once the fruit is harvested. 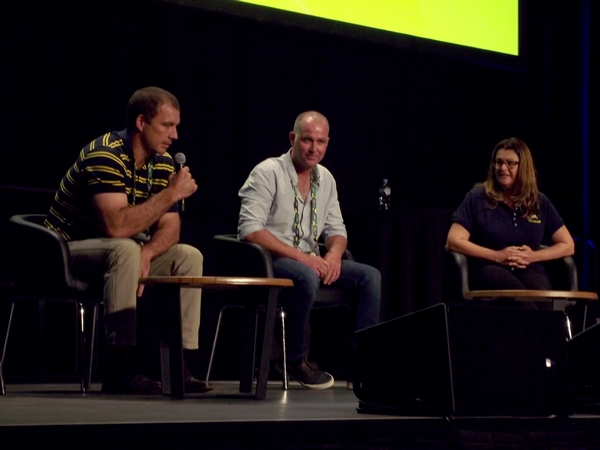 Innovative water quality run-off system with environmental and productivity benefits
Bartle Frere's Gavin Devaney grows 250 acres of bananas, with his father Bernie, at Boogan, just south of Cairns in North Queensland. He explained to the Congress about his innovative water quality run-off system, which has provided some economic benefits to his production.

"We farm in the wet tropics, and with that comes the benefits of having enough water to irrigate, but also comes the challenges of trying to get rid of the water, and any excess groundwater when trying to farm in these areas," Mr Devaney said. "We purchased 65 acres off our neighbour, which was originally a cane farm. We were then going to transition the entire property over to bananas. But it was a wet farm and we always knew we would have to make changes to the way that we farm the land. No farmer likes to lose their topsoil and no farmer can actually afford to lose all their fertilizer. So, we are doing everything possible to keep it on the farm."

Among the challenges faced by the Devaneys was that the farm is located next to a major highway and water exits the farm and into the local river.

"We decided to take a holistic approach towards the environmental changes that are needed to actually clean the farm up and make it economic to farm," he said. "Drone photos showed certain areas of the property that were damaged by the wet, and underground/mine water. So, we looked at row direction and contouring, and anything that may alleviate those problems." 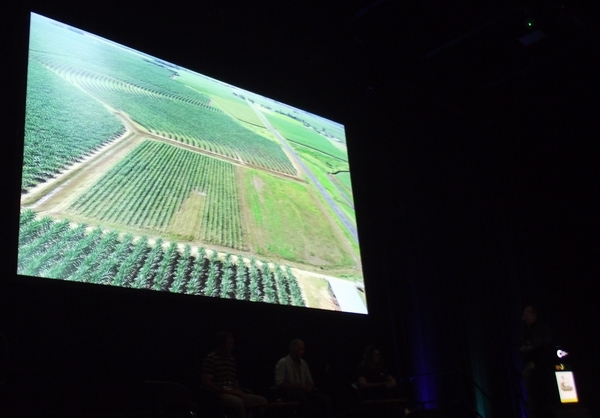 After considering the regulation that governs what can be released from the site, he worked with fellow farmer Will Darveniza to come up with on-site water treatment solutions that would suit the profile of the property. A drain was built across the farm, that was similar to the urban stormwater drain that handles high flows.

"In periods of low flows, the central part of the drain acts as an in-drain wetland," Mr Darveniza said. "So, we are creating the right sort of system there for microbes to live in and denitrify the water. In periods of high flow, the water will spill over the edges, and will hopefully filter out some of the sediment as well before it leaves the property. Really, it led to was us changing the shape of the drains and just by doing that, was all we needed to do to make a difference to the water quality."

Mr Devaney says the water from the drain has been monitored over the past two years, and that he was able to denitrify by developing the water plants in the drain. So, he was able to mow and maintain the water plants, without spraying them, and says by keeping a grass coverage has been able to stop erosion factor. Then, with the help of GPS mapping, a gridded drain system, with 2.5 kilometres of underground piping was installed.

"It worked, as we were able to access the property quicker after the wet season," he said. "Where we were getting bogged in working before the piping went in, there is no more problem - we are growing healthy bananas there now. So, now the farm is up and running and we have put in the practices that we wanted to. Overall, the system has worked very well. We have no water laying in the paddocks, so the gradients with the laser level have worked well. We ended up with no wet spots in the paddock. The levels worked well, the underground drainage worked well - in the three levels, we ended up with very little flooding, so it coped with the volume of water."

Bartle Frere Bananas took out the industry's Future Farming Award at the Congress, which recognises extraordinary environmental work being undertaken by growers.