A Bloomberg report says the Yantian Port in Shenzhen, one of the busiest ports in the world, may experience delays. This is following a local Covid outbreak which led the port to close some facilities and adopt more stringent virus control measures. A port worker said all goods leaving Yantian Port needed to book slots. When asked if there are any ships available, the employee said the port has strengthened the inspection of imported goods, and the entry of goods into China may also be delayed.

According to a recently issued notice, Yantian Port, an export and industrial center in southern China, has temporarily stopped receiving export containers until May 30 (Sunday). According to official media reports, the port’s container yard has been partially closed since Covid cases broke out among port workers and the wider community last week.

Yantian is one of the busiest ports in the world. Data from the Shenzhen Transportation Bureau show that it handled 13.34 million 20-foot units in 2020. A report on the Shenzhen government website stated that it serves about 100 vessels a week. 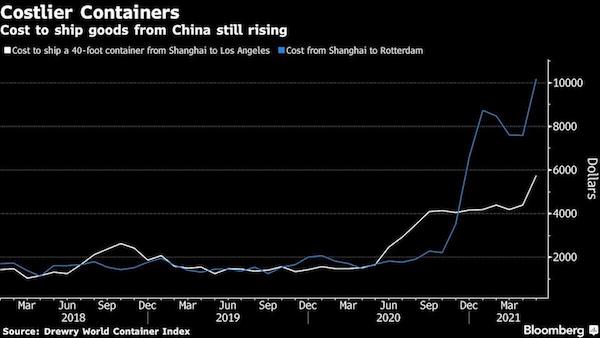 The interruption will continue through next week, and shipping company AP Moller-Maersk A/S reported that its shipping schedule has been delayed due to the closure. Any delay may lead to more serious consequences and may put further pressure on the already sky-high logistics costs of Chinese goods, which have soared under the influence of record export demand, container shortages and other factors.

The transportation costs are just one of the factors that drive up China's export prices, which may further aggravate global inflation. The Shenzhen government stated in a notice that it will conduct large-scale Covid testing of the entire population in Yantian District.