In the Gamtoos Valley they are harvesting lemons, clementines, Novas and navels. Significant volumes will start coming in next week and in two weeks they'll be running at full capacity. 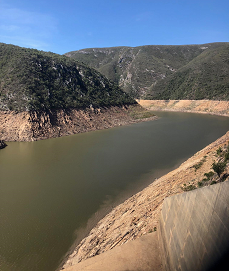 The Kouga Dam (right) is 4.3% full, and a mere 0.05% of its water is released every day to all of its water users. About half of the farmers in the area have always had access to the low quality water from the Gamtoos River, which is what has pulled many of them through years of drought, but in places the river has run dry and the quality has become almost unusable.

Over the past three years, but particularly during the last year, many boreholes have been sunk. Underground water quality is very variable and marginal, but at this stage any water is better than no water, says Fredri Kok, CEO of Patensie Citrus, a 93-year old grower-exporter company that represents 24 growers and shareholders around Hankey and Patensie.

“Fortunately we're now entering the period in which the trees will start using a bit less water, but this is definitely a grave situation.”

Despite years of little rain and deep cuts into their water allocation, the internal quality is excellent and fruit is clean, with little wind damage, resulting in higher packouts and more cartons than last year from the same orchards, he says.

“On average, fruit is one and a half sizes smaller, so on the other hand that will decrease the number of cartons, but because of new plantings we're expecting the same amount of cartons as last year,” he says. “The quality is better than last year, but it is a difficult situation, and the strong Rand will negatively impact back-to-farm earnings.”

They are worried about the coming season, which starts in three months, and no rain in sight. The Kouga Dam is filled by precipitation in the Langkloof, parts of which had good rain recently, but only resulted in a 0.12% rise in the dam's level.

He remarks that it would be difficult to persevere under these circumstances without faith. 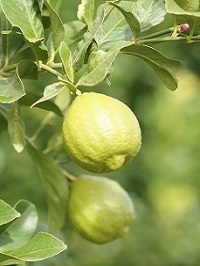 Patensie Citrus markets approximately 85% of their fruit themselves, except when packing into brands like Sunkist and preferring to let specialists handle their Russian and Bangladeshi trade.

In the north of South Africa and in the Western Cape fruit is a bit larger, while the Eastern Cape traditionally has smaller fruit, so they are already established in markets that take small fruit, like the UK on soft citrus and the Middle East on navels.

On late Valencias European and UK retailers are good clients for smaller fruit.

“The big challenge for everyone this year is that we're starting to see that lemons are coming under pressure, especially on small lemons, of which we have many. In the UK we have good options, but in the Middle East there are limited opportunities for small lemons.”

Five years ago there were good prices for processing lemons but the juicing price is currently so low, it might not even cover packaging costs.

South Africa needs more citrus markets
“Too much citrus was planted in South Africa,” he states, “and if you look at the volumes ahead it's clear we really need new markets or we will run into trouble. Challenging times are ahead and the sooner we prepare ourselves, the better.”

He continues: “Europe still accounts for 70% of the trade of Patensie Citrus, also because, like the Western Cape, we don't have citrus black spot, so we're very dependent on the European market. We hope to soon hear that the USA is open for the rest of the country, it would open up new opportunities for us. Every year we develop new markets in the Far East, but the misfortune for us is that a market like China prefers large fruit of which we don't have a lot this year.”

Every year they send small volumes to Asian countries like India (whose landside cooling phytosanitary protocol adds 21 days to the journey) and Indonesia (periodically open for South African soft citrus) with an eye on future growth.