The Port of Hamburg’s seaborne cargo throughput in the first quarter exceeded expectations. The upward trend here was powered by a steep increase in March, especially. Seaborne cargo handling in the first quarter advanced by 0.4 percent, and therefore better than in the same quarter of the previous year. Container handling was 1.8 percent up on the same period of 2020. After a modest start in the first two months, March brought a strong boost. Throughput of bulk cargoes was ahead by 2.7 percent.

The trend for the Port of Hamburg’s first-quarter seaborne cargo throughput was still affected by the lasting repercussions of the corona pandemic. “The month of March brought the crucial turnaround for container handling. Compared to March 2020, this was ahead by 9.4 percent. From March, we discerned a recovery in several areas of the economy, stronger consumer demand, and renewed stability in the number of liner services calling in Hamburg. With 697,000 TEU being handled on seaport-hinterland services by rail, a 5.1 percent gain, we achieved a fine result,” explains Axel Mattern, Joint CEO of Port of Hamburg Marketing. 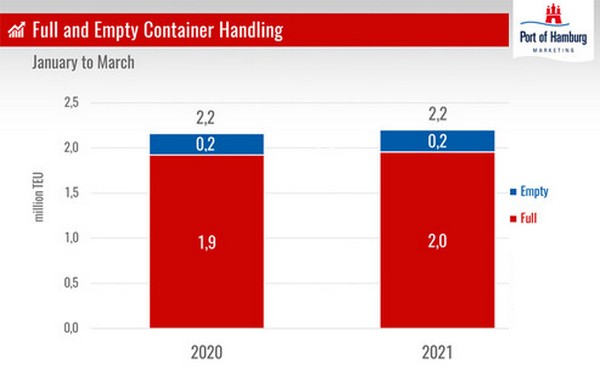 First-quarter seaborne cargo handling in the Port of Hamburg
Port of Hamburg terminals loaded and discharged 32.1 million tons of seaborne cargoes in the first three months of this year, representing a slight - 0.4 percent - increase on the previous year. At 22.4 million tons, general cargo throughput was just slightly - 0.5 percent - lower than in I/2020. The trend on container handling in Hamburg at 2.2 million TEU was also upwards, the gain on the previous year being 1.8 percent.

“Import and export container throughput performance was almost identical. At 1.1 million TEU each, both categories rose by 1.8 percent. The America, Asia, Africa and Australia/Pacific container trades ensured upward throughput trends. On European sea trades, the only positive development was a gain of 3.7 percent on transhipment throughput with the Scandinavian countries. Generally, the European sea trades reported a four percent downturn in the first quarter,” says Mattern.

Outlook for 2021
For 2021, the Port of Hamburg’s marketing organization anticipates a generally more stable run for seaborne cargo handling. With the resumption of suspended liner services, and some new ones, and in a situation that we hope will be improving worldwide, throughput figures of 130 million tons and 8.7 million TEU should be attainable.