In recent days, a very important change has taken place at Planasa. After 35 years with the company, Miguel Ángel Hidalgo is leaving his position as Corporate Scientific Director (CSO), which he has held since 2003. The team of breeders he led has been responsible for globally-successful varieties, including Sabrosa-Candonga® strawberries, Adelita raspberries, a blackberry variety and six blueberry varieties, which have allowed Planasa to grow at key moments.

Although he is leaving his current position, Miguel Ángel Hidalgo will remain linked to the company as a technical advisor, not only to ensure a successful takeover by his successor, Manuel Rosas, but also to continue putting his experience and knowledge at the service of the company's growth and progress in the three R&D centers Planasa has in Spain, France and the USA. 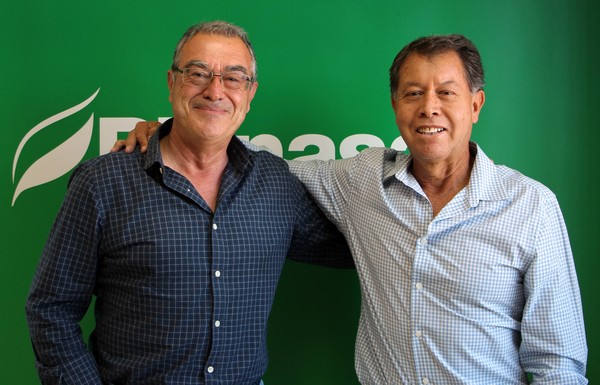 Planasa's CEO, Michael Brinkmann, thanked Miguel Ángel Hidalgo for his career: "Thanks to Miguel Ángel's leadership and effort, Planasa has been able to develop the most recognized varieties in the market. Without his contribution, Planasa would not be where it is today."

Manuel Rosas
Miguel Ángel's position has been taken over by Manuel Rosas, who has spent his professional career mainly in companies of the sector in the United States. For the last four years he has been global research director at Bayer/BASF and Nunhems. Before that, he spent another six years as vice president of research at Driscoll's, and before that, he was director of vegetable breeding at Monsanto.

Manuel, a Mexican national, has lived in different countries closely related to the sector and to breeding, such as the USA and the Netherlands. Academically, Manuel holds a Master's degree in Plant Pathology from the Colegio de Postgraduados in Mexico and a PhD in Plant Pathology and Agronomy from the University of Edinburgh.

"It is a great honor and responsibility to be given the opportunity to make a contribution in this great company, Planasa. My main objective will be to maintain the company's excellent working environment and then seek to incorporate new technologies and tools to make the improvement and development of our crops even more efficient. I thank Miguel Angel for his great openness and availability during this transition stage and my new team for having immediately accepted me. I am confident that together we will make a difference in this attractive and rewarding industry," said Rosas.