Near Ballarat, Central Victoria, there is a brand new shed. It is home to exotic fungi farm The Mushroom Connection. Owner Jason Crosbie was a fungus enthusiast, but he was working in IT. In 2020, his vision to make a living off mushrooms became a reality. On his Ballarat hill, Crosbie grows a range of mushrooms such as blue oysters, king brown, shiitake, enoki, and lion's mane, harvesting about 80 kilograms per week for restaurants and food stores.

Five years ago, there were only a handful of exotic mushroom growers like Crosbie in Australia. It is now estimated there are about 70 nationwide. "During lockdown, it seems everyone learned how to grow mushrooms," Crosbie told goodfood.com.au. 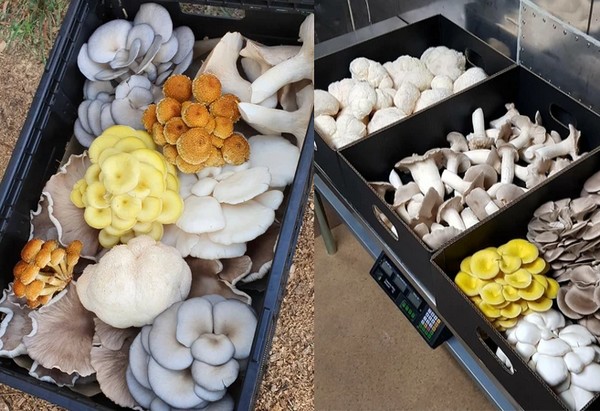 It seems the exotic mushroom industry has a promising future. Niall Blair, professor of food sustainability at Charles Sturt University and former NSW Minister for Primary Industries, is a keen supporter of its growth. A board member of White Prince Mushrooms, and grower of everyday supermarket browns and whites, he is keen to work closely with producers of more left-field fungi.

"The scope for harvesting exotics such as lion's mane for its medicinal use is enormous," says Professor Blair, referring to the mushroom's reported benefits for brain function.

After working with farmers during the last drought, Professor Blair is keenly aware that mushroom farmers are in control of the growing climate instead of being controlled by it.

"Drought will continue to determine the availability of the substrate [a mushroom's growing medium], which is actually a byproduct of growing and processing grain, legumes, and fibre," he says. "But that is the beauty of mushrooms. It's a circular industry where waste products can be an income stream."