The Northwest Cherry Growers' Field Estimate team has compiled a second ("Round 2") projection for the 2021 Northwest crop. Following our first round of estimation, this 22-person field team looks at their orchards as well as the surrounding area's volume dynamics and compiles overviews for their area based on changes to the fruit set following bloom.

Each member submits the data specific to their active growing districts, and then that data is built into an estimation model which represents each of the Northwest's cherry growing regions. As with Round 1, the model is populated with historical data, growing degree day patterns, acreage shifts, market trends, processing tonnage and in-field assessments, and then uses the Field Team's input to project a crop for the coming season. This year, the second round data from the model suggests a 2021 crop of 223,723 tons.

This represents a 6% decrease from the team's Round 1 estimate. It is also remarkably similar to the estimated crop size produced by the roundtable meeting of growers across the five states on May 19th. Each year, growers from across the Northwest gather to discuss crop and market dynamics in advance of the harvest. While gathered, each is asked for his or her input on the overall crop size. At this year's meeting, the estimated total was 22,165,000 boxes. 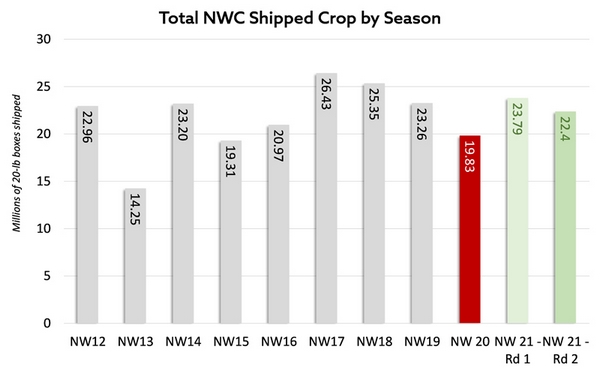 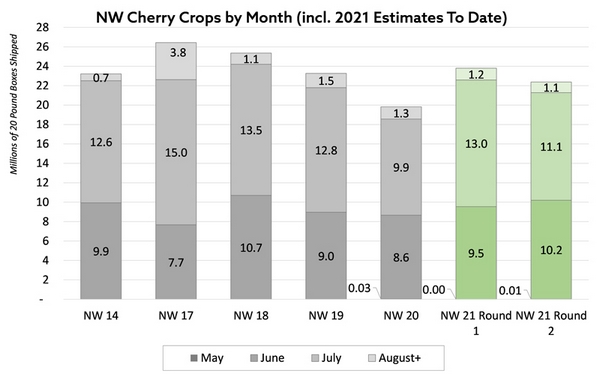 Yellow Cherries: Reports from our Rainier/yellow cherry growers have been very promising. The cherry's yellow skin is the most susceptible of all varieties to late spring weather, but the set on the trees so far appears to be the making of a phenomenal crop. In response to surges in demand from largely younger consumers, our Rainier growers have been committing a tremendous amount of effort to gently increase the Northwest's overall yellow cherry yield. The Round 2 estimate for 2021 doesn't break the record, but should produce more promotable volume than last season. 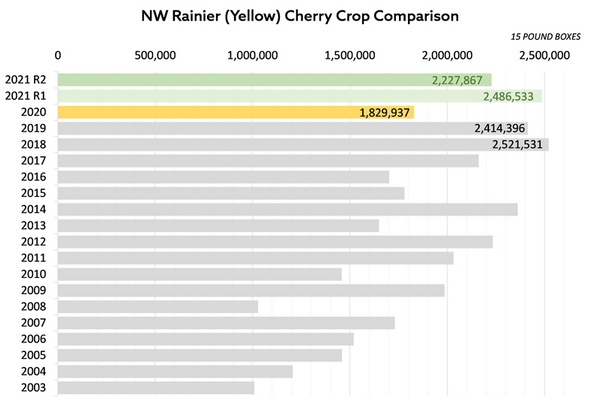 The frosts of April have thinned our crops to some degree in lots of pockets around the Northwest. For some growers, that has resulted in a No Pick situation. Fortunately, for most growers it has simply reduced the crop. Often, that's resulted in fewer clusters and more spread out cherries...which results in larger, higher quality fruit at harvest.

Crop Points to Remember - 2021
Based on the best information available at this time: 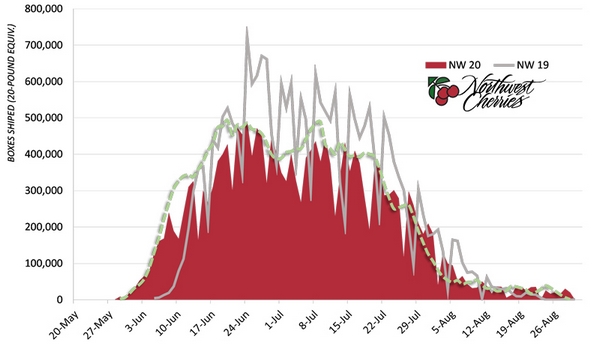 Crop Timing: Based on our accumulated Growing Degree Day data, it appears that AT THIS POINT we are on track for an early June 1 start. In several of our earliest regions the degree day build up is identical to last year, which saw harvest start on the 28th of May.

The accumulation of heat units so far suggest a longer crop, with more typical distribution between the districts than we've seen in some recent seasons. In the chart below, you can see the earlier nature of most districts across the board this year, as well as a healthy range between the warmest (Tri-Cities) and one of the coolest (Wenatchee Hts) growing regions. 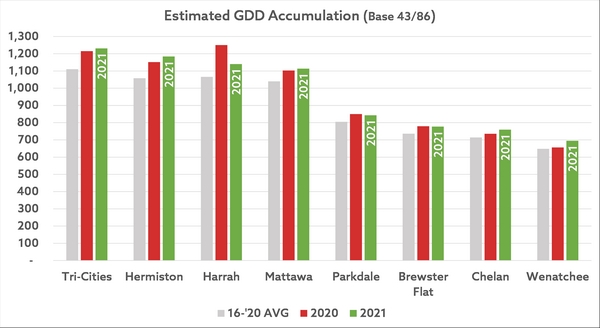 The generally optimal weather that's driving an earlier start to our crop did put a number of growing regions in danger of late frosts and wind storms. Growers can heat their orchards to some degree, but a few nights of deep-diving temperatures in April reduced some of the early season crop potential. Additionally, high and sustained winds during bloom appears to have had an effect on pollen viability in a number of orchards, as the subsequent fruit set following great bee activity didn't produce as many cherries as normal. If the orchards retained enough fruit to harvest, the good news is the remaining cherries will be exceptionally large and sweet. However, we expect the combined hits on a number of our early season orchards will result in a slower first few days of harvest as an industry. As the harvest moves into regions where the crops were not in such a critical stage, we expect to see daily shipment volumes climb swiftly.

For several years growers across the Northwest have been feeling the effects of a group of pathogens collectively called Little Cherry Disease (LCD). Though different in nature, this group of viruses and bacteria cause the same results: small, under-developed and bitter fruit. Researchers have narrowed down their spread between orchards to several insects who carry LCD on their bodies, though the exact method of insect relocation between orchards or spots within an orchard is still yet to be confirmed.

What we do know is that our industry's orchard practices and packing technology ensure none of the small & bitter fruit is shipped for consumers. The high quality of Northwest cherries is a standard throughout the world, and we are committed to maintaining that bar. Even though it's been an orchard issue for several years, our shipped crop 5-year average is 80 percent 10.5 row and larger, which is an increase over the 10-year and 15-year averages.

But behind the scenes it's required some aggressive intervention by our growers. There is no cure yet, so the only procedure to stop the spread is tree or orchard removal. Even after removal, the ground must be attended to and the local source of infection must be addressed, otherwise growers risk re-infecting their replanted orchard. Aside from heavy financial costs, this orchard and tree removal has been a hit.