SIAL China, the international food exhibition in Shanghai, has come to a satisfactory conclusion

SIAL China, the international food and drinks convention (hereafter referred to as 'SIAL China') is one of the three largest food conventions in the world. This convention is the key summit for people in the global food supply chain industry and is organized every year. This year the convention took place in the New International Convention Center in Pudong, Shanghai. The successful convention was concluded with a festive closing ceremony on the 20th of May. This year the convention covered an area of 180,000 square meters and attracted more than 4,500 participants from all over the world. Together the participants showcased more than 300,000 products. The three-day convention was visited by great crowds of people, and some visitors came back every day. 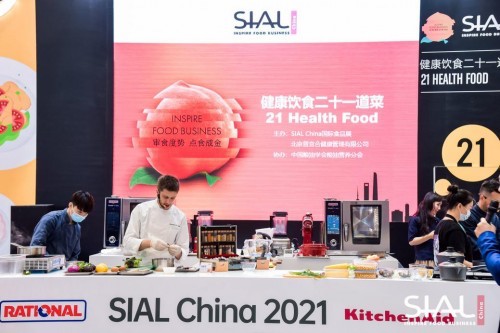 Global new retail summit
SIAL China invited Christopher A. Pissarides, the recipient of the 2010 Nobel Price in Economics, and well-known economics scholar Wu Xiaoqiu, to lead a forum for the crème-de-la-crème of the industry on global new retail. Together they carried out multi-dimensional analysis and in-depth discussion of current trends in the global economy, as well as future trends in the food and drinks industry. SIAL China worked together this year with SIAL Paris, XTC, Kantar, Kantar China, China Health Preservation Association working committee on health preservation information services, and iResearch Consulting Group. Together they announced the 'legislative proposals for the growth of food and drink consumption in 2021' for the first time. This publication provides the food and drinks industries with guiding principles on the basis of careful analysis of product development, sensory experience, convenience, and healthy balance, all with the consumer in mind.

Contract signing ceremony
Participating companies also took advantage of SIAL China to pry open the huge Chinese food market, and many of them accomplished agreements during the convention. Specialists from all over the globe participated in the unique Match Me service of the convention. This service analyzed supply and demand, and matched more than 2,000 buyers and sellers during the convention, including Changchun Europe and Asia Group, Beijing Hualian, Wumei, Shounong, and the Suning Group as well as nearly 300 other companies who engaged in trade negotiations and signed contracts worth 1.5 billion yuan [230 million USD].