Although the main rush of panic-buying by consumers has passed, fuel prices continue to rise nationwide after the hacking incident affecting a main East Coast pipeline earlier this month.

Multiple grower-shippers report the rising cost of transportation as a major factor in determining whether it is profitable to continue harvesting their crops when the commodity price is low, or towards the end of the season when quality becomes variable. With truck rates already at all-time highs and farm labor increasingly difficult to find, this has just added one additional layer of worry to an already stressed, yet vital, industry tasked with feeding the population.

Trading is slow and prices much lower as some buyers cancel orders in favor of domestic product, in no small part due to issues with aging and uncertainty about arrival times due to the delays. 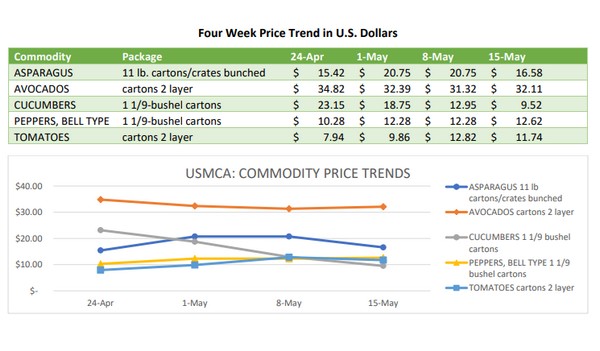 A wide range in prices was reported, with high truck rates continuing to influence loads to the Midwest and East Coast. Movement from Central District California is expected to decrease as most shippers have finished for the season. Supplies are in too few hands to establish a market and the last report has been issued.

Movement of avocadoes from Mexico crossing through Texas is expected to decrease slightly with moderate trading and demand as shippers report last week’s push for higher prices failed to materialize.

Cucumber crossings from Mexico through Nogales, Arizona are expected to decrease as quality is diminishing and low prices, competition with other growing areas, and difficulty finding trucks are making many shippers consider ending the season as soon as next week. Movement from Mexico crossing through Texas is expected about the same.

Trading was slow, with prices lower on most sizes and much lower on large as demand continued to decrease. Most movement was once again for contracts or previous commitments. Movement of cucumbers from Central and South Florida is expected to decrease. Prices were generally unchanged with moderate to fairly good demand most of the week.