Logistics have been severely impacted by the pandemic and the domino effect of multiple port delays has been a disaster for many companies involved in the supply chain of fresh produce. In order to continue shipping fresh produce overseas, Australia-based SRE Innovation found a solution that plays a key role in maintaining a healthy business environment. “We export produce around the globe and our shipments were delayed globally due to COVID-19 testing at Port of Entry, causing arrival issues,” says Ricky Chong with the company. “We were seeing shipping delays of 10-30 days and developed a COVID-19 disinfectant chamber that allows for safe transportation of foods and other goods,” he added. The chamber has resulted in a reduction of possible clearance delays (COVID testing) and delivers a product that has been disinfected against the possibility of the COVID-19 virus as well as Listeria, E-coli, Salmonella, etc.

The disinfectant system has expedited produce arrivals in destination countries. “A major share of our global exports is being shipped to China,” shared Chong. “We knew that if we would obtain approval from China Certification & Inspection Group (CCIC) – who works in conjunction with China Customs - we would significantly reduce our risk in this market.” Since the soft launch, other countries have already followed China’s lead by expressing interest in the chambers. 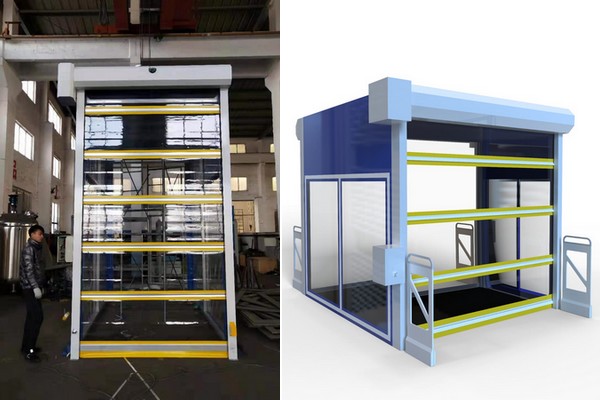 Automatic disinfection process
The TIDS360 chambers are light-weight and easy to install just about anywhere in a facility or outside on the dock. The disinfectant process itself takes less than 5 minutes in the two-pallet and six-pallet chambers. Although the approved disinfectant dissipates within minutes, venting is included and can be attached to an outside wall if the units are setup inside a facility. Non-micro fog technology is being utilized, providing full coverage of cargo shipments quickly and easily. The eye-sensor opens the door of the chamber automatically as each pallet approaches the door, and the disinfection process is fully automatic with the press of a button.

To ensure an efficient process, a QR code sticker is affixed to each pallet and the process is video recorded and automatically uploaded to SRE Innovation’s cloud servers, creating a link to CCIC’s traceability system. “Under the protocol between SRE and CCIC, China Customs can quickly scan the codes automatically through CCIC’s traceability system to verify and clear the shipments,” commented Chong. QR codes can be scanned with a mobile device or entered manually using a PC, laptop, or tablet. For additional convenience, SRE Innovation has also developed an Android mobile app and an app for Apple devices is pending. Depending on the authorization level, the cloud data is fully or partially accessible to all parties involved.

Overwhelming interest
The interest has been overwhelming and SRE Innovation has received an initial order of 30 units from China, to be used for imports and exports. In addition to produce, the technology can be applied to other sectors as well. “It can be applied for the safe transport of small-scale manufacturing, agriculture, agri-food, pharmaceuticals, household goods, and courier/expedited services,” said Chong. In addition, the company has developed a home/office model for the disinfection of mail, parcels, grocery, footwear, and more.

The chamber hasn’t officially launched yet as the company was waiting for an official ceremony to be held in Beijing. With festivities being postponed indefinitely because of the pandemic, it was decided to officially launch later this month. From that time, orders will be accepted and manufacturing for global business will kick off. The chambers can be delivered to ports anywhere in the world by sea, but SRE has already received some requests for air shipments as well.

“We are very excited to offer the world a new product that increases the safe transport of foods and other goods, reduces clearance delays and delivers a product has been disinfected against possible viruses,” finished Chong.

All three models that are available.