"The purchase price in Chinese watermelon plantations is more or less the same as last year. There are no significant fluctuations. The major difference with last year is a shift from 8424 watermelons to Meidu watermelons. The Meidu watermelon is a mixed variety that ripens in the middle of the season. Compared to other varieties the Meidu watermelon has a firmer fruit rind and therefore endures storage relatively well," said Mr. Fan Zhiqiang, spokesperson for Yurun (Beijing) Agricultural Science and Technology Development Co., Ltd. 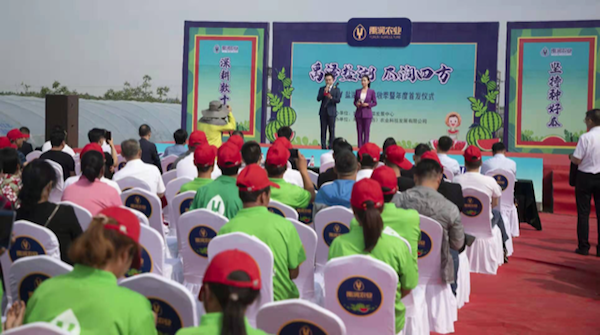 When asked about their retail strategy, Mr. Fan Zhiqiang replied: "On the day of the ceremony several major clients signed a contract for more than 10 million kg of Salt Lake watermelons. These clients include Kunming Youxian Meijia, Hunan Xingqin Fruit Industry, Xi'an Guoguo Jia, and Beijing Shouhang. That is a great start and a good indication for the rest of the season. We have not yet started online sales because the watermelon is a fragile fruit that is best sold fresh. However, we are preparing online retail channels for when the season is well under way. At the moment we mainly sell our watermelons in more than 20 cities and regions, including Beijing, Yunnan, Xi'an, Harbin, and Heilongjiang."