Strawberry and apple breeder, Fresh Forward, has moved locations. In a new, fully renovated greenhouse of four hectares, the first tests are in full swing. In the new greenhouse, the breeder can conduct tests on various cultivation systems. “With this, we can take the first steps in putting a system into practice for a new selection before testing it with the growers,” Koen Merkus explains.

Over the past couple of years, the breeding activities of Fresh Forward have expanded considerably. Both open field and substrate programs have been scaled up, leading to Fresh Forward growing too big for their location in Eck and Wiel. Reason enough to move to Huissen, where a greenhouse featured during last year’s NEXTgarden got completely readjusted and equipped to breed strawberries.

Closer to practice
The significantly larger area which became available has been divided into different departments. This was needed to accommodate the increased amount of seedlings, disease tests, and cross-breeding rooms. It is now also possible to work with multiple cultivation systems at the same time. Meaning it is now possible to use a specific cultivation system for breeding any given variety. “Our breeding programs for the open field  and tunnel cultivations will remain at our location in Stevensbeek, but the substrate program is going through a growth spurt thanks to its move.”

Due to many compartments, there is now also room to plant an interesting variety of test cultivations that can be compared to the current varieties in cultivation on a large scale. “We used to not have this possibility in our greenhouse”, says Koen. “Now we do. We can now gain more experience in our own greenhouse by conducting practical tests on our selections. During this phase, we can also tinker with the variables such as fertilization regimes, plant data, the type of tray plant used, or lighting. Because of this, we can introduce a new variety along with an instruction manual improving its starting position on the market.”

A look into the early heating cultivation test, mid-April

A look into the low-chill-cultivation test, mid-April

Low-chill
At the new location, they are also working more with the ‘low-chill’-cultivation system. With this cultivation system, varieties with a low need for cold, from December to July, can be cultivated with the constant production of high-quality fruit from the end of February. 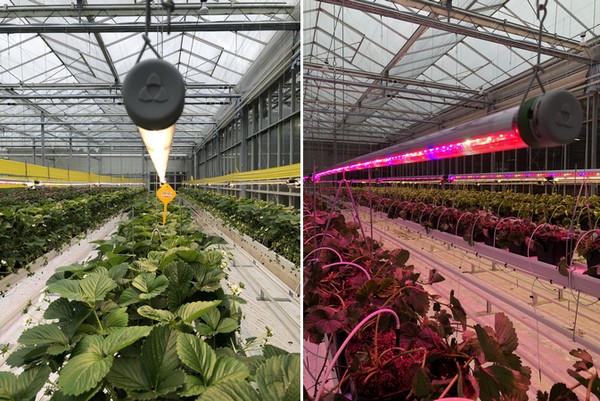 A part of the low-chill cultivation is lighted with LED. The fixtures are controllable, so the intensity of the light can be adjusted to match the amount of natural light coming in.

The entire Fresh Forward team is happy about the new greenhouse. “We are already noticing the benefits provided by the extra space and possibilities, allowing us to breed on a larger scale and one that is closer to practice. Combined with the knowledge and abilities of our team, we expect many tailored strawberry varieties to come from our extensive substrate program.”