Maine-based Pine Root Farm is a woman-owned and woman-operated farm that recently built its second greenhouse. “Seven years ago, Ruby Nelson and her husband Gideon Knapp built everything from scratch”, says Emily Cai, who is currently working as an apprentice at the farm that has around 14 acres of fields and two, brand new greenhouses.

Before building the first greenhouse, Pine Root Farm’s vegetables were all grown on open fields. Pine Root Farms recently built its second greenhouse. “Ruby and I constructed it mostly just the two of us, with some help from Gideon. Luckily, Ruby had done some greenhouse building already, so with her experience, we were able to build it. When we were putting the plastic on, it’s recommended to do it with several people, but we managed to do it with just the three of us, despite the strong wind at the time. At one point I feared the plastic would become a sail and blow us all away, but in some way, we managed, and now it’s in full use.” 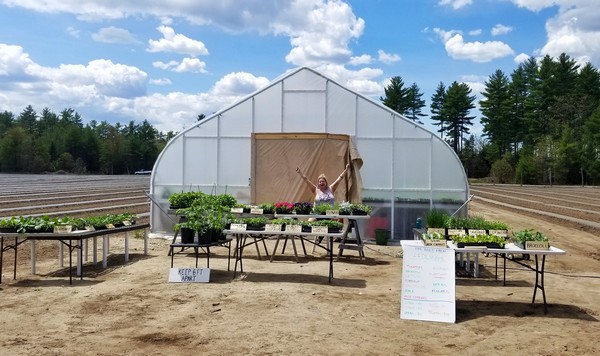 One of the greenhouses is used for tomato plants, the other one for seedlings. “We built the first greenhouse last year with the support of the National Resources Conservation Service (NRCS) government grant. The condition is that it’s used as a season extension, so that’s the one we plant our tomatoes in. Outside of the greenhouse, we grow a large variety of vegetables. We have corn, tomatoes, cucumbers, melons, zucchini and summer squash, broccoli, cabbage, sunflowers,  peppers, husk cherries, and even separate gardens where we grow herbs and cut flowers.

Pine Root Farm grows mostly for their on-site farmstand. “Normally we have an indoor store where we sell our produce”, Emily tells. “Last year, with COVID, we had an outdoor stand with tents and tables where we had to select the produce for the customers. It was a lot of work, but then we had our best season yet. People preferred to buy at our place because we worked really hard to make sure our farmstand was COVID-safe and it seemed like people really wanted to support local agriculture. Customers would come and tell us that they didn’t want to shop in grocery stores and that our farmstand was where they felt the safest. I know that some businesses got hit hard by COVID, but luckily we were able to have a really good season.

Human rights and farming make a wonderful match
Emily, who comes from a background in Human Rights and Humanitarian Action, made a rather abrupt switch to agriculture when COVID allowed them to rethink their office jobs. “After finishing my studies and volunteering on a farm for a year, I realized I didn’t want to sit behind a computer at a desk all day. Working on a farm is one of the most satisfying things you can do, working hard and being tired at the end of the day, being able to grow things and literally harvest the fruits of your labor, being able to feed people, and seeing that your work has an immediate positive effect on the community. I also realized that there’s a huge connection between farming and human rights and social justice that involves everything from climate change to immigration to structural racism to poverty and wealth disparities to land access – the list goes on. After studying human rights, I came to the conclusion that farming was a way for me to create change on a grassroots level.”

Maine proved to be the perfect place to put this idea into practice. Emily, who grew up in Maryland, chose Maine because of its extensive farming infrastructure. “We have the Maine Organic Farmers and Gardeners Association (“MOFGA”) that allows people to do apprenticeships on farms in Maine. Pine Root Farm caught my interest for many reasons, including their focus on learning, their commitment to food access, and their involvement in the community.” 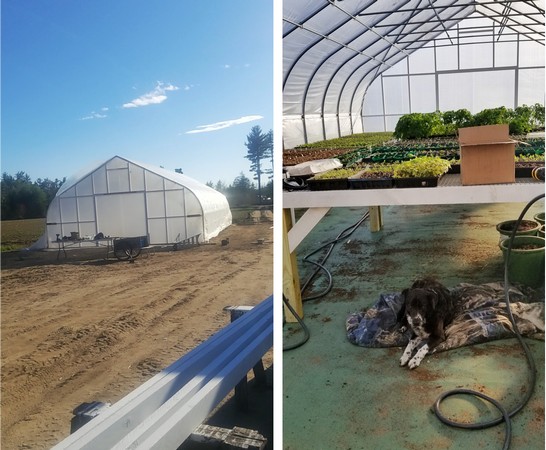 Focus on food access
Food access is one of Pine Root Farm’s focus. “One of the reasons why we are not a certified organic farm is because it doesn’t make sense economically. We do pay attention to what’s in the fertilizers and sprays we’re constantly trying to improve, but technically we are not organic. Expensive organic vegetables might be something that some people are interested in, but we want to make sure our produce is affordable for the local people.”

Pine Root Farm also has relationships with local food pantries and makes regular contributions. Besides, they helped to create, along with Merrifield Farm, the Prescriptions for Produce program, where families are given a prescription by the local health clinic which allows them to receive a weekly box of vegetables from the farm. “Local families having access to fresh produce is one of the things we want to work for, and I’m glad that I’m able to work at Pine Root Farm and be involved in the community,” Emily says.