March’s fresh and processed trade up on February figures

Potato trade data as up to the end of March 2021 has now been released by HMRC.

The European Union (EU) accounted for 97% of the total fresh exports in March. This figure was up 19% from February, but still lags EU average exports pre-end of the transition period (Jul-Dec). Key destinations for fresh exports in March remained the Irish Republic, Spain, and Belgium (ordered by volume). Exports to the Irish Republic increased notably on the month, by just under 1.5Kt. EU season-to-date total is now 111.9Kt, 22.6Kt behind the EU 5-year average.

For processed exports, March figures increased from February for nearly all commodities, apart from Starch which fell by 8%.

The largest actual increase from February to March was seen in canned exports, rising 564t* (34%) to 2.2Kt*; this figure is just above the March 5-year average. Frozen, dried, and crisped exports increased too, rising by 279t* (16%), 278t* (62%) and 189t* (16%) respectively. We can see that season-to-date (Jul-Mar) starch and dried totals are ahead of 5-year averages. Whereas frozen, crisped, and canned season-to-date exports are lagging.

Seed exports fell 939t (34%) February to March, to 1.8Kt. This is below the 5-year average for March by almost 5.4Kt, though brings season-to-date seed exports leading the 5-year average by 1.8Kt. As discussed in February’s trade round up, the export of seed potatoes from GB to the EU is prohibited. Yet, some exports are still being recorded, perhaps due to the new recording system. 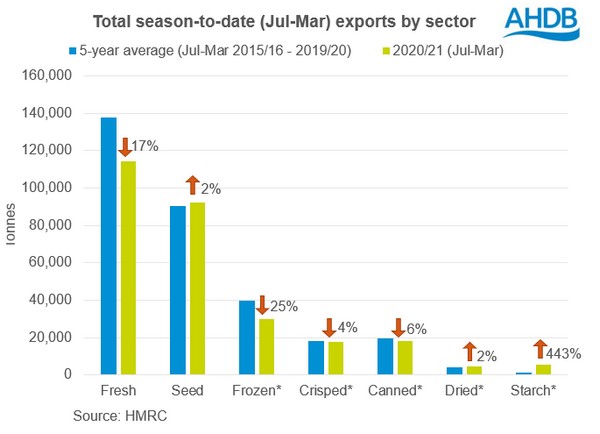 Imports
March figures show imports for both fresh and processed potatoes to have increased across the board February to March.

Fresh potato imports were up 726t (22%) in March from February, to total 4.0Kt. Though February was a particularly low month and March 2021 fresh imports lagged the previous 5-year March average by 11.4Kt (74%). Season-to-date imports of fresh potatoes now totals 62.0Kt, 20.1Kt below the previous 5-year average.

Seed imports too were lower in March, down 14%. This brings season-to-date imports to 2.4Kt, down 2.8Kt from the 5-year average.