A university professor in Nampa is currently developing a fruit harvesting robot prototype for Idaho orchardists. Duke Bulanon is an engineering professor at Northwest Nazarene University, and to this goal he received a $132,000 specialty crop grant from the Idaho State Department of Agriculture. The goal of the project is to develop an orchard robot (OrBot) that can be programmed to assist with harvesting fruit.

Bulanon said one of the biggest challenges fruit growers, as well as other farmers in Idaho and around the U.S., face right now is a lack of available labor, especially during the narrow harvest season.

He told postregister.com that OrBot is being developed with the thought of supplementing rather than replacing human labor. The system will pick fruit slower than a human, but ‘it can run all day and throughout the night’, said Marina DeVlieg, an NNU engineering student assisting Bulanon on the project. “That can really help make up for the lack of labor because it doesn’t need a break and it can work on its own.” 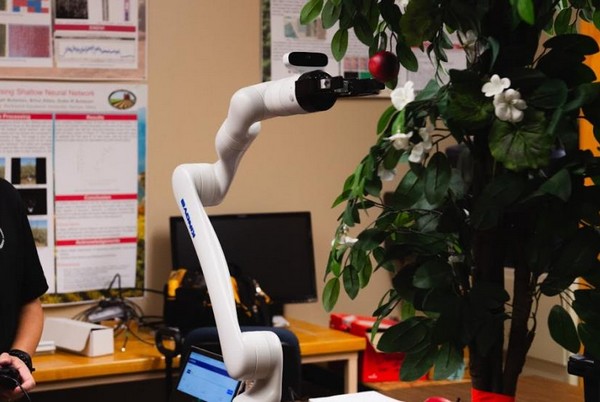 OrBot will consist of a machine vision system, a robotic arm, a gripper and a control system. Bulanon and the engineering students helping him develop the orchard robot recently gave Idaho Farm Bureau Federation employees a demonstration of the robotic harvesting system.