"For sustainability reasons, we are increasingly trying to avoid air-shipped goods"

For almost 20 years now, Herbafrucht Ltd has been regarded as a specialist trader in fresh cut herbs in the Munich wholesale market hall. On Feb. 1, 2021, company founder and managing director Georg Steinkeller passed the baton to longtime employee Phillippe Kahn. We spoke with the new man at the helm about the development of the herb industry, wholesale in times of Corona and the local seasonal kick-off.

Despite the pandemic, Mr. Kahn looks back quite positively on the first few months after having received the baton. "The external circumstances made the takeover quite difficult. However, because business was relatively quiet due to corona and seasonal factors, we were able to concentrate fully on internal operations. If the takeover had taken place in the winter during our peak season, that would definitely have been more difficult." 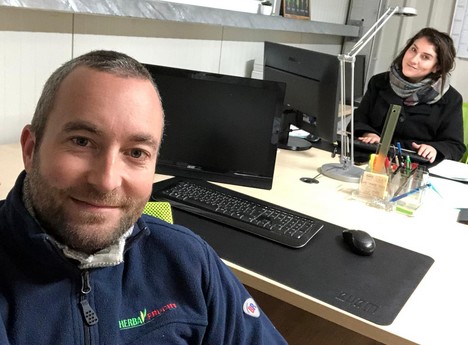 Phillippe Kahn and saleswoman Marie in their office.

Further export potential exists
Since the company was founded in 2002, the herb business accounted for about two-thirds of sales, and Herbafrucht was also involved in the trade of Italian salads. The latter division is now continued independently by Mr. Steinkeller under the name Giocola e.K.. Kahn: "In my opinion, the herb trade still has a lot of development potential. Thanks to the convenient central location and the wide range of products offered by the Munich wholesale market, we are also an important point of contact for Austrian, northern Italian and eastern European wholesale customers."

Shift from imports to domestic herbs
Nonetheless, Mr. Kahn says much has changed in the past decade. "We see a very strong trend toward regional goods for sustainability reasons. Originally, we offered more air-shipped goods from Asia and Africa, at which time quality and price were top priorities. In the meantime, we rely mainly on German herbs in the summer, excellently from regional cultivation. In addition, we source Italian and Spanish batches, but are increasingly trying to do without air-shipped goods."

In recent years, German cut herb production has caught up rapidly. Merchandise is even increasingly being exported to Austria and northern Italy, Kahn adds. "This year, the start of the season was a bit slow due to the cold snap. All herb varieties are available from domestic production, but only in limited quantities, which is why we have to resort to imported goods, especially for the more marketable varieties," says Mr. Kahn.

Lack of planning security
The current wholesale market business continues to be overshadowed by the ongoing corona crisis. According to Mr. Kahn, "The loss of the catering business has led to a noticeable drop in sales for us. We didn't even realize before how big a part of sales food service was." In contrast to the first lockdown, he said, the company was able to adapt to the situation during the second lockdown. "Due to a lack of planning certainty, we scaled back our fixed programs considerably, allowing us to react flexibly to market developments."

Development into a service provider
Despite the current exceptional situation, Mr. Kahn is largely positive about the future. "Classic walk-in customers are still present in large numbers in the wholesale market hall, and I don't believe that Corona will change this proven model. Both full-range and specialty retailers have a clear raison d'être at the wholesale market in my view. This means that we continue to focus more on herbs, but we also source complementary items from our foreign suppliers, such as pulses from East Africa or vegetables from Italy. In addition, we offer our customers an additional service in which we purchase goods vicariously at the wholesale market so that people can purchase the full range through us."